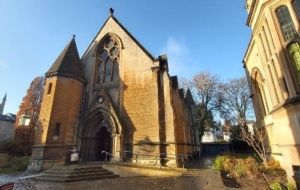 Univ is proud to showcase here a small selection of recent examples of academic excellence from our College community.

Starting with research, “The Oxford COVID-19 Vaccine: a vaccine for the world” has won a Vice-Chancellor’s Innovation & Engagement Award. The team behind the vaccine included Professor Gavin Screaton, Professorial Fellow and Head of the Medical Sciences Division. You can find out more about the Vice-Chancellor’s Innovation & Engagement Awards here.

Professor Daniel Freeman, Supernumerary Fellow in Psychiatry, has been elected a Fellow of the British Academy in recognition of their distinguished contribution to research. Professor Freeman focuses on understanding and treating paranoia. He developed the Feeling Safe Programme, which is the most effective psychological therapy for persecutory delusions.

Professor Ros Rickaby, Professorial Fellow and Chair and Professor of Geology, has been elected a Fellow of the Royal Society for her work on the interactions between life and the composition of Earth’s oceans and atmosphere.

Professor Ben Jackson, Leslie Mitchell Tutorial Fellow in History, has been awarded the title of Professor in the University’s latest Recognition of Distinction exercise. Professor Jackson is the author of The Case for Scottish Independence: A History of Nationalist Political Thought in Modern Scotland (Cambridge University Press, 2020.)

Professor Clare Leaver, Supernumerary Fellow, was also awarded the title of Professor by the University. Clare’s research mainly focuses on careers and incentives in the public sector. Prior to working at Univ, Professor Leaver was a University Lecturer in Economics in the Department of Economics at Oxford and Fellow of The Queen’s College.

Professor Karolina Milevicz, Tutorial Fellow in Politics, was also awarded the title of Professor by the University. Karolina’s research focuses on the role of international institutions and law in promoting international cooperation from both a theoretical as well as an empirical perspective. Her most recent book is Constitutionalizing World Politics: The Logic of Democratic Power and the Unintended Consequences of International Treaty Making (Cambridge University Press 2020.)

Professor Barry V L Potter, Univ Supernumerary Fellow in Pharmacology, was formally awarded the honorary degree of Doctor of Science by the University of Bath in June.

Moving to teaching, last month, Opportunity Oxford, a major programme to support students from under-represented and disadvantaged backgrounds, won at the Vice-Chancellor’s Education Awards. The winners were announced at a ceremony at Worcester College on Thursday 29 September 2022. Opportunity Oxford is led by Dr Andrew Bell, Senior Tutor at Univ, and is based on Univ’s own Opportunity Programme.

Alex Benn (2018, Law), Senior Lecturer in Law, has set up a new module with the Law Faculty. Together with Professor Rebecca Williams and the Law Faculty, Alex has created the module, “Hate Crime and Discrimination”, as part of the Law Finals option, Advanced Criminal Law.

Finally, this month, Univ launched a new Academic Transition Programme for all first-year undergraduate students. The programme has been developed to help incoming students equip themselves with the necessary skills to transition successfully to university-level study.

Univ is preparing to give…