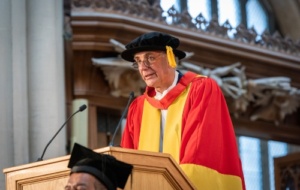 Professor Barry V L Potter, Univ Supernumerary Fellow in Pharmacology, was formally awarded his honorary degree of Doctor of Science by the University of Bath in June.

Professor Potter’s research group focuses on two key themes: the chemistry of cell signalling and anticancer drug design and discovery. The work is characterised by a unifying focus to exploit chemical principles for intervention in Biology and Medicine, particularly stereochemistry. The group aims to understand and exploit cell signalling processes in their broadest sense and to demonstrate the power of chemical synthesis and chirality for illuminating fundamental biology and for therapeutic intervention in medicine. The group hopes to uncover basic mechanisms, define new drug targets, design tailored synthetic drug candidates and make a therapeutic difference in areas of unmet medical need, particularly in cancer.

The group has defined novel therapeutic concepts and drug targets, pioneered a new structural motif for applications in oncology and women’s health, and translated “first-in-class” agents from the academic laboratory to 19 Phase I and II human clinical trials to date. This was facilitated by founding the spin-out company Sterix Ltd, which was acquired by big pharma with whom they founded a multi-£M academic-industry partnership. They have developed drugs, which have been, or are currently in, clinical trials in metastatic breast cancer, endometrial cancer, prostate cancer and endometriosis and have demonstrated clinical benefit in cancer patients, including stable disease, responses and increased progression-free survival.

Professor Potter is a Fellow of the Royal Society of Chemistry, the Royal Society of Biology and an elected Member of Academia Europaea and the UK Academy of Medical Sciences. He is also a Visiting Professor at the University of Bath and a member of the Scientific Advisory Boards of the Lister Institute of Preventive Medicine and the Institute of Chemistry and Biochemistry, Czech Academy of Sciences, Prague.

Professor Potter has published over 700 research articles with over 20,000 citations to his work, placing him in the top 1% of medicinal chemists worldwide. He is also a co-inventor on 46 patent families from over 700 worldwide filings. He has delivered many invited, plenary and keynote lectures at international conferences. He has served on numerous international and editorial boards, major grant awarding panels, charities, and scientific advisory boards, including UK Research Councils, RAE/REF panels, the Wellcome Trust, and the Lister Institute.

From October to December…