James Griffith, Fellow of Univ from 1782-1808 and Master from 1808-21, is best known today as the Master who sent down Percy Shelley in 1811, but he was also a keen artist and architect. He has already appeared in two earlier Treasures, one a general piece about his life and work (The Master who sent down Shelley) and another, Book of maps with a surprise, about a book of maps of Univ’s Welsh estates into which Griffith had painted a little watercolour of an attractive view which caught his eye when he was visiting there as Bursar in 1796.

This third Treasure to mention Griffith, however, focusses on perhaps his most ambitious piece of work, namely an altarpiece he created for the Chapel in 1808, which has only just been rediscovered and restored.

Previous Treasures have discussed Griffith’s skill as an architect and a watercolourist, but arguably his greatest passion seems to have been reserved for pokerwork or pyrography. Pyrography is an unusual art form, in which the artist begins with a blank piece of wood, and then by using heated pokers or other tools “burns” a design onto the wood.

Griffith’s niece by marriage, Elizabeth Grant, who stayed in the Master’s Lodgings (which in those days occupied Staircases XI and XII) for some months in 1810, remembered her uncle’s activities with pokers in her memoirs. She wrote of the Master’s Lodgings that “The walls of some rooms were hung with his ‘poker paintings’, pictures burned on wood by hot irons”, and that at the eastern end of the ground floor of the Lodgings (now the bedroom on the right-hand rooms on the ground floor of Staircase XII) “was a small room with a fireplace, used by my Uncle to heat his irons for his poker pictures.” (Elizabeth Grant, Memoirs of a Highland Lady, ed. A. Tod (Edinburgh, 1992), vol. 1, pp. 155 and 156)

Two examples of Griffith’s pyrographs, created on beechwood, have long been hanging on College walls: 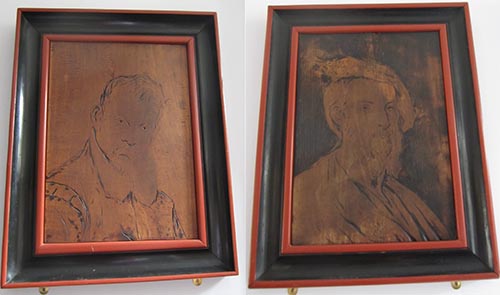 The portrait of the man without a hat appears to be based on a self-portrait by Annibale Carracci (1560-1609), now in the Uffizi Gallery in Florence, of which an image may be found here.

Griffith is never known to have visited Italy, and so he must have worked from an engraving of the Carracci. One may even imagine Griffith looking over his collection of engravings for a picture to catch his eye for copying. Carracci was much admired in the early 19th century, and so it was reasonable for someone as knowledgeable of painting as Griffith to know his work. At the moment, however, we do not know the original of the portrait of the man with the hat; if anyone does recognise the original, we would be delighted to hear from them.

These portraits are both quite small, each measuring only about 22.5 by 16 inches. They are also in some ways quite sketchy in execution. In 1808, however, around the time that he became Master, Griffith planned a more ambitious pokerwork piece, twice as large. Whereas the two smaller pieces may have been the sort of images which Griffith hung on the walls of the Lodgings, this new work was intended for the altar of the Chapel. 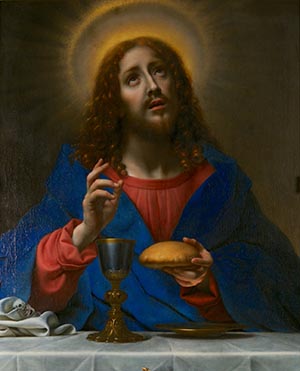 Griffith’s source this time was Carlo Dolci. Carlo Dolci (1616-86) was born in Florence and became one of the most famous painters of his age. His reputation remained high in the decades after his death, but fell during the 19th century. One painting of his which was especially admired in Britain in the later 18th century is an image of Christ blessing the bread and wine, which at the time was commonly called “Salvator Mundi”.  The original painting hangs at Burghley House; an image of it is reproduced here by kind permission of the Burghley House Collection.

Dolci’s painting was widely copied, especially through engravings: in 1798 a needlework copy was even made of it, which toured the country, and is now in the Royal Collections. We know of an engraving which was made in 1769 by Richard Earlom (1743-1822), and this may be the image which Griffith used. A copy of that engraving is now in the British Museum and may be found there.

It is quite possible that Griffith never saw the original painting, but relied entirely upon the engraving for his copy.

Griffith’s plan to adapt a painting by a 17th century Catholic artist was not so unusual for the period. Several Colleges in the later 18th century had commissioned or acquired paintings to be used as altarpieces, several of them based on 17th century originals, mainly from Italy. Jesus College, for example, acquired a copy of a painting by Guido Reni (1575-1642). Univ did not have the funds or the connections to acquire such a work, but Griffith was clearly determined that there should be something to adorn the Chapel’s east end. 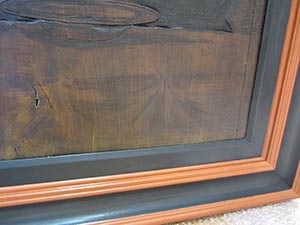 At the bottom right-hand corner, Griffith has signed his work, and dated it to 1808, the year in which he was elected Master.

He also made sure to sign himself “James Griffith D.D.” As was then the custom for new heads of Oxford Colleges who were in holy orders, he had become a Doctor of Divinity straight after his election, and was clearly proud now to be “Dr. Griffith”.

The altarpiece was removed in 1862 when the east end of the Chapel received a dramatic and controversial refurbishment under George Gilbert Scott. It was first hung in the Library, but, when the Library was rebuilt in 1937, it was moved to the Old Bursary at the back of 90 High Street, which is where Harold Clifford Smith found it when he was compiling his great inventory of the College’s chattels in 1943. When he saw the picture, it had been set in a large gilt frame. At an unknown date after 1943, the picture was moved out of the Old Bursary, and by the early 1990s was seen in the cellars under the New Building, no longer with its frame. 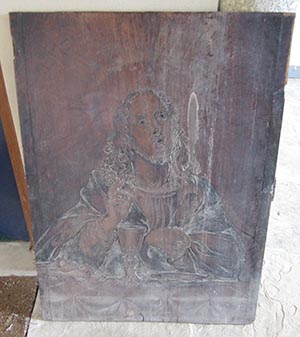 In the summer of 2020, during the respite after the first lockdown, the picture came to light once more in the New Building cellars. This time it was decided to move it into a safer place. This photograph of the altarpiece taken outside the archives office in July 2020, just after it had been salvaged.

Under the guidance of our Curator, Professor Michael Collins, it was agreed that this work should now be properly restored and hung in the College.

A conservator specialising in old woodwork, Bianca Madden, was engaged, and here, below, is the altarpiece after her work was completed. 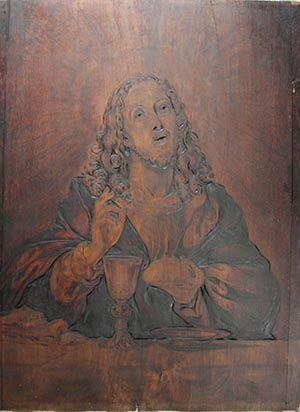 A specialist picture framer, Sara Stoll, then created a new frame to house the image. In April 2021, the work was all complete, and the picture hung up in College once again. At the bottom of this page is a photograph of the altarpiece fully restored and reframed.

The altarpiece is without doubt the most ambitious work of art known to have been created by Griffith, and bears witness to his determination to adorn our Chapel in a fitting way. Perhaps the piece may always arouse curiosity rather than admiration, but it is undoubtedly a very significant piece in the history of the College in general and the Chapel in particular.

We are most grateful to Bianca and Sara for their work in bringing the work back to life once more. 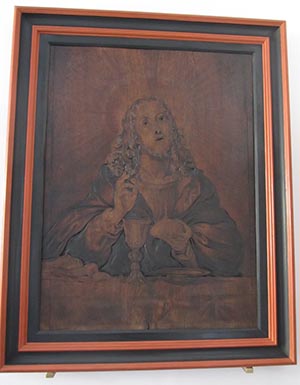 Elizabeth Grant, Memoirs of a Highland Lady, ed. A. Tod (Edinburgh, 1992), provides an entertaining and perceptive account of James Griffith and Univ from her visit there in 1810, including some memories of Percy Shelley. A copy is available in the College library (KCA/STR).

For a discussion of Oxford Colleges’ commissioning and purchasing of religious art in the later 18th century, see: Peregrine Horden, “The Oxford Colleges as Patrons of Religious Art in the Eighteenth Century”, in Robin Darwall-Smith and Peregrine Horden (eds.), The Unloved Century: Georgian Oxford Reassessed (History of Universities special issue, publication date 2022).