Among the major collections of papers about our estates in the College’s archives is one relating to a group of farms in Montgomeryshire (now part of Powys) around the town of Llanidloes. These were all bequeathed to us in 1588 by Robert Dudley, Earl of Leicester, to endow two scholarships at the College. Although the lands were all sold in the early 1920s, we still hold the papers, and they offer a typical mixture of title deeds, leases, accounts, correspondence, and maps. They are detailed here.

One of the more unusual items among the items relating to our Welsh estates is this leather book containing two maps (ref. UC:E10/M1/2). It is a little book, measuring just 9 by 6 inches (370 by 225 mm) when closed. 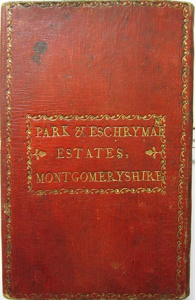 The first map in this book depicts the Park Estate, near Caersws. The map is dated January 1770 and is signed by one John Gutteridge, who had previously drawn a map for Univ of its property at Handley Park, Northants.

The second map shows a group of farms in Escrymaen (here spelled “Eschrymain”), near the hamlet of Tylwch: 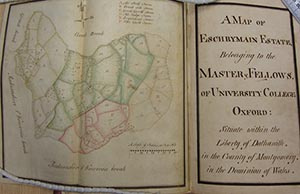 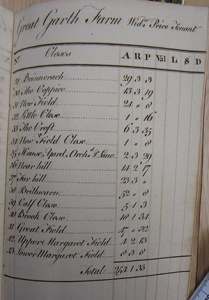 So far the book is typical of its kind. Such elegantly drawn maps, with their accompanying descriptions, were very important for a College in managing its estates, as providing precise guidance on the boundaries of the lands which they owned, and would have been used for several years until it proved necessary to create replacements. 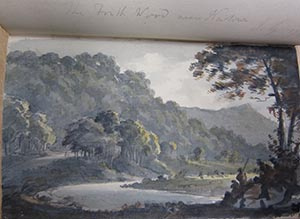 However, the book contains something else. On a blank page after the reference section to the Park Estate appears a charming watercolour (pictured left and in larger format at the bottom of this page).

On the opposite page is written: “The Frith Wood near Newton J.G. 1796″

Our artist’s name is easy enough to guess: in 1796, the Bursar of Univ was James Griffith. James Griffith today is best known as the Master who sent Percy Shelley down in 1811 for refusing to answer questions about the authorship of his pamphlet The Necessity of Atheism, but there is more to him than that. As was shown in an earlier Treasure, he was also a talented amateur artist and architect.

His cousin (and later niece by marriage), Elizabeth Grant, remembered that he “drew in every sort of style beautifully.” (E. Grant, Memoirs of a Highland Lady, ed. A. Tod (Edinburgh, 1992), i. 54).

This watercolour brings to life Griffith’s artistic side. A Bursar’s duties included visiting the College’s estates, and it looks as if, in 1796, Griffith visited the College’s farms in Montgomeryshire. Gutteridge’s book of maps is easily portable, so Griffith must have taken it with him to help him identify College land during his progress.

During his Welsh visit, James Griffith was evidently at something of a loose end one day, because he decided to get out his paintbox, and depict a view which caught his attention, but the only paper he had to hand was a spare page from the book of maps.

By the 1790s, Welsh scenery had become esteemed among lovers of the sublime, and Griffith was a true man of his time in being inspired to make a record of an appropriately romantic vista (including a figure or two in the foreground).

The result is a pleasant surprise, and almost a secret between Griffith, future Bursars using this book of maps – and College Archivists. 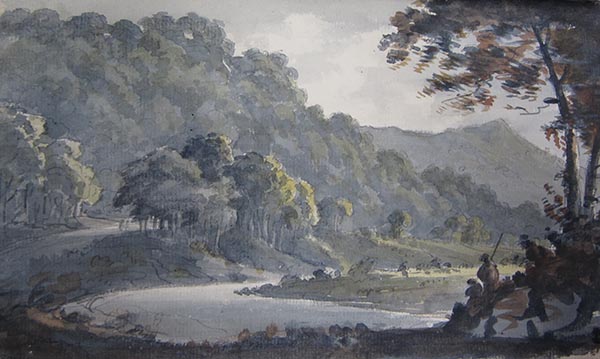