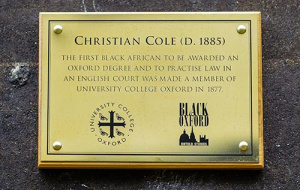 On 14 October 2017, the Master unveiled a plaque to honour Christian Cole (OM 1877). Cole came from Sierra Leone, and was the first Black African to take a degree from Oxford. It brought to fruition the efforts of Pamela Roberts, author of Black Oxford: the untold stories of Oxford University’s black scholars, and Dr Robin Darwall-Smith, our Archivist, to give recognition to one of the pioneering champions of black and ethnic minority students at the University. As our Treasure features resume after a brief hiatus, we felt it appropriate to highlight Christian Cole. 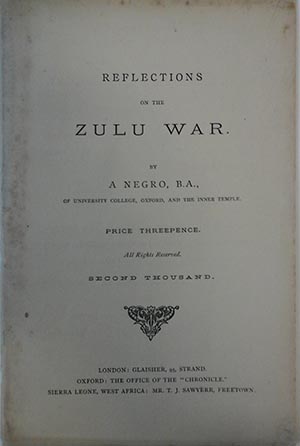 Fig. 1 – Reflections on the Zulu War

This month’s subject is a pamphlet entitled Reflections on the Zulu War (see Fig. 1). Written by Cole in 1879 it only quite recently came to be in our Library. In 2006, the Archivist spotted a copy of the pamphlet on the catalogue of a rare books dealer in the United States. A consortium of Old Members was then formed to purchase it for the Library. As far we know, our copy is the only one that survives of the two thousand or so that were printed. Appropriately, it is now kept in Cole’s College Library.

Cole attended Oxford University in the 1870s as a non-collegiate student and read “Greats” (Classics). Having taken his degree in 1876, he became a Member of Univ in 1877, receiving support from George Bradley, the Master (see Fig. 2). He then returned to Sierra Leone but struggled to find employment, and so in 1879 he came back to Britain with the intention of becoming a barrister. He achieved this ambition when he was called to the Bar at the Inner Temple in 1883. This was also Cole’s second ‘first’ as he was the first black man to practise Law in the English Courts. 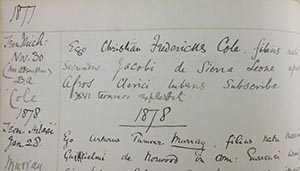 Why he chose to write on the topic of the Zulu War (fought between the Zulu army and British Imperial forces from January to July 1879) is a matter for conjecture, but he evidently had strong views he wished to express, and this pamphlet gives us an insight into the man’s intellectual concerns.

It would appear that the intention was for the pamphlet to have as wide a reach as possible for it was produced under the auspices of three printers: one in Freetown, Sierra Leone, known as T J Sawyerr [sic.]; one in London, Glaisher of the Strand; and one here in Oxford. The Oxford printer was the Office of the “Chronicle”, located in the 1870s at 119 High Street, where Ede & Ravenscroft today have their shop. 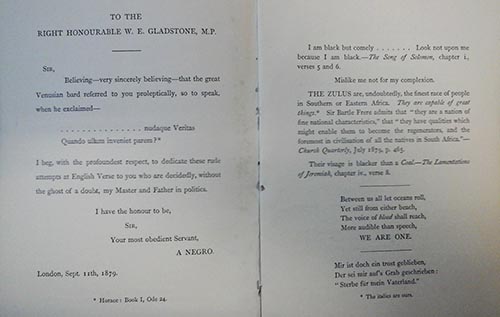 Cole addressed the pamphlet directly to “my Master and Father in Politics”, W E Gladstone (1809-98) whom he addressed with a quotation from Horace’s Ode 1:24 (see Fig. 3). Cole wrote that he believed Horace referred “proleptically” to Gladstone when he wrote:

Gladstone, a distinguished scholar of the Classics, would no doubt have identified the poem, which speaks about shared grief. Perhaps Cole believed that Gladstone would be in empathy over the tragedy of the Zulu War and its aftermath, and wanted to make known his views on the issue to the future Prime Minster. The Liberal’s imperial policy appeared to represent something different to the Disraeli government’s which had sought to conquer and subjugate the Zulus.

The main part of the pamphlet is a 19-stanza poem. The poem began by addressing “Some white men of England” who Cole described: “Believe they alone / Are the people on earth, and / The rest are unknown.” He then turned to “White men of England / Who reason, who love / To rule and command / Those whom you are above.” Cole seems to have been appealing to the government in waiting, the Liberals, who would be led by W E Gladstone, to consider carefully British policy regarding the Zulu nation whose army had been defeated and King, Cetshwayo, put into exile following the Battle of Ulundi.

Cole’s concern with the plight of Cetshwayo and the Zulu people comes through strongly in this piece of writing. As such it is a unique artefact of anti-war literature written by a nineteenth-century black intellectual who sought to raise awareness of the consequences of overseas British Imperial policy and action. As a critique of war, Cole’s concluding lines are still relevant today:

While we live, let us ever
Be kind to our kin;
Let us love one another,
Through thick and through thin:
Let us never be jealous;
Let every one know
That one GOD hath made us
Who live here below.

KCA/COL Reflections on the Zulu War. By a negro, B.A., of University College, Oxford, and the Inner Temple (London: Glaisher, 1879).