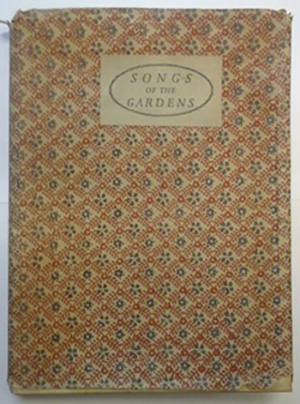 This month’s treasure is an anthology of eighteenth century songs, selected and edited by the composer, music critic, and editor, Philip Heseltine (1894-1930). Peter Warlock was the pen name adopted by Heseltine, one of the more colourful personalities of the Edwardian British music scene.

The gardens referred to in the title are the London Pleasure Gardens (Vauxhall, Ranelagh, Marylebone etc) of the eighteenth century. Located on what were then the outskirts of London, they were the theme parks and socialising spots of the day. Visitors would promenade the landscaped gardens and pavilions, delighting in entertainments which ranged from puppet shows to pyrotechnics to “ingurgitating monsters”.

Music, in a variety of styles, was also on offer. The gardens had in them concert halls and outdoor gazebos in which instrumentalists and singers performed. In 1764 a young W.A. Mozart (1756-91) gave a recital in the impressive rotunda at Ranelagh Gardens as part of his tour of England. Ranelagh was also where Charles Burney, Univ’s most famous D.Mus, was appointed organist in 1770.

The songs sung in the gardens became a genre in their own right and many of them were published, only to be forgotten as musical tastes and styles changed. Warlock, himself an enthusiast of English vocal music, found these collections of the published songs while working in the British Museum and, at the suggestion of the singer Philip Wilson (1886-1924), set about making an anthology. 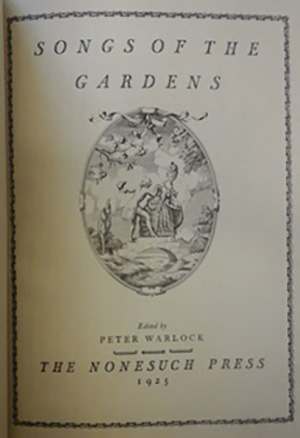 Song of the Gardens dates from 1925 during a period of tremendous creativity and scholarship for Warlock. He was living in Eynsford and immersed himself in early music, producing two books, one a study of the composer Gesualdo, and the other titled The English Ayre. Also from this time came the much-loved Capriol Suite, inspired by the idiom of Elizabethan dance music.

Most of the composers included in Songs of the Gardens are relatively obscure. The most significant are the two Arnes, Thomas (the composer of Rule Britannia) and his son Michael. The light-hearted titles of the songs give an idea of the delights and activities of the gardens: The Air Balloon, The Lover’s Lesson, The Masquerade Song. The words of The Pleasures of Spring Garden Vauxhall, set to music by William Boyce, offered a paean to the Pleasure Gardens:

With this blissful Spot delighted,
Here the Queen of May retreats;
Belles and beaux are all invited
To partake of varied Sweets.

When it came to publishing Songs of the Gardens, Warlock tapped into the Edwardian market for fine-press books. It was published in a limited run of 875 (Univ’s copy is number 129) by the Nonesuch Press under the supervision of the owner of the press, Sir Francis Meynell (1891-1975). With its beautiful decorative engravings and woodcuts, and a title page designed by Stephen Gooden (1892-1955), this anthology was more of a collector’s item than one for the performer. Our copy has a prettily-patterned (if slightly aged) dustjacket, with a plain vellum binding. 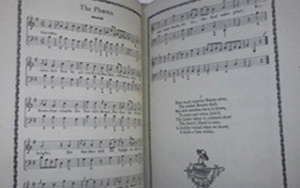 Two further touches added a retro charm to this volume. The first was editorial. The notation was left intentionally sparse, often presented in clefs that had fallen out of use by the early twentieth century and, as such, Warlock did very little editing of the music. His stated aim was to present the songs in a literal form, as the composer would have published them. The second was typographical. The punches used for the music and text were designed for an Oxford University Press edition of Tudor Church Music, giving what would have been a noticeably quaint look to the volume.

Univ’s copy was given to the Library in 1947 by Oliver Bell (1898-1952), a Univ man (matr. 1919) who went on to a distinguished and prolific career in film and the arts. We’re fortunate to have this fine specimen of a keepsake which draws attention to forgotten places of fancy and preserves a small piece of lost sonic history.