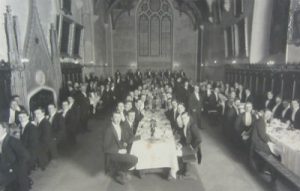 For Eights Week, a photograph of a Bump Supper seemed the obvious Treasure. The Hall at Univ is full of Edwardian undergraduates in white tie and tails; bottles of champagne are on the tables; and a night of revelry is on the cards. Admittedly it is a Bump Supper for Univ.’s Second Torpid, rather than for an Eights Week crew, but it is still a representation of Univ rowing success which we hope may be followed this week.

The photograph (ref. UC:P345/P1/1) was given to the College in April this year by the Fellow Archivist of Wadham College, who had found it unexpectedly in a pile of photographs, and who kindly offered it to us.

At one level, this month’s Treasure is an image of a happy time being had in our Hall; but a closer examination shows how a single object can lead one in different directions all over the archives.

Various pieces of evidence show that the photo was taken in March 1904, when our Second Torpid did splendidly well, achieving six bumps. The Boat Club Captain’s Book describes their achievement. (ref. UC:O4/A1/3). 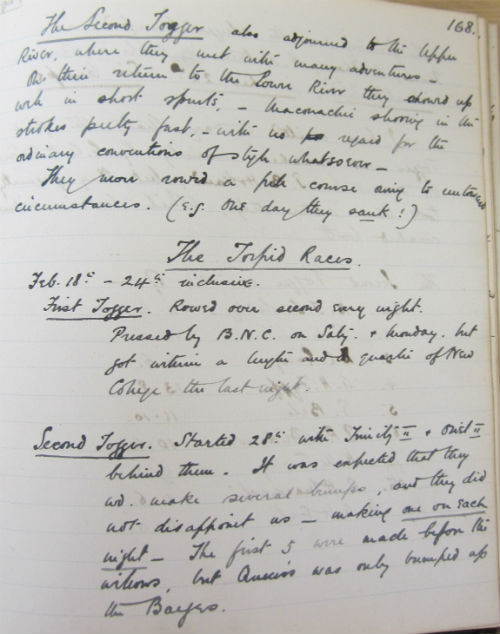 “Togger”, by the way, is old Oxford slang for “Torpids”. The note at the top of the page suggests that the Second Torpid had some trouble in training, even sinking at one point. 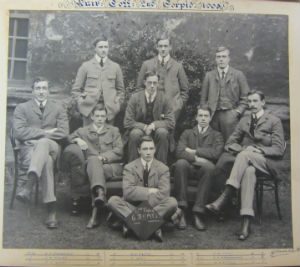 Picture right are the members of the triumphant crew themselves (ref. UC:O4/P1/3).

Frustratingly, it was long the custom for photographs of rowing crews to identify the sitters by the places where they sat on the boat, and not by their positions on the photograph, so that the only person whom we can identify for certain here is Maurice Fell, the cox, sitting cross-legged on the ground. Nevertheless here are the names of our crew, where they sat on the boat, when they came up, and what subjects they read:

The Second Torpid of 1904 was a hard-working bunch: every one of them apart from Alan Fyffe got an Honours Degree.

If any one can link up any of these names with any of the sitters, then the Archivist would be delighted to hear from them.

So much, then, for the crew whose success resulted in this dinner. But now have a closer look at the Hall where the Second Torpid and their chums are dining, for all is not quite what it seems. Look at this detail of the fireplace: 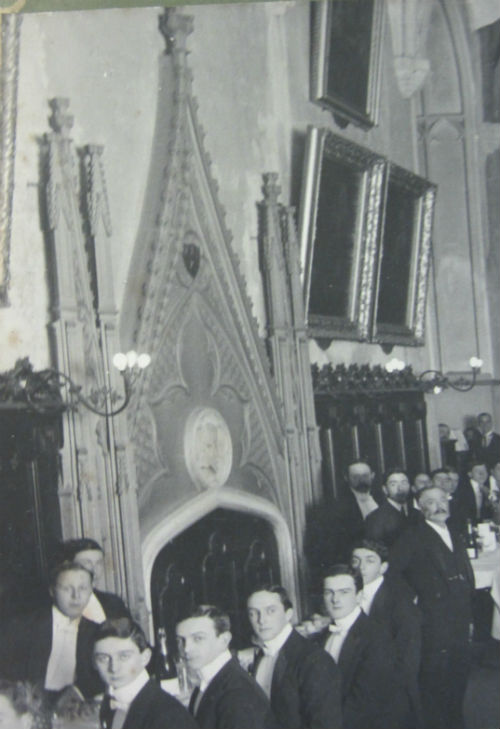 It is not the fireplace one sees in the Hall today. Now look at this detail of the far end of the Hall: 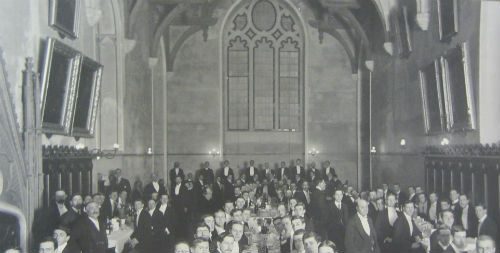 There is no panelling there, nor are any portraits hanging there; all we can see is bare stone wall. And if you look at the top of the photo, you can see some white corbels hanging down. What is going on?

The answer is that this photograph captures a remarkable moment in the architectural history of our Hall. Back in 1766, the architect Henry Keene had been commissioned by Univ to undertake a complete refurbishment of the Hall, in the latest “Gothick” manner. Here is a photo of the Hall, taken in about 1860, which shows the flamboyant results (ref. UC:P167/P1/1): 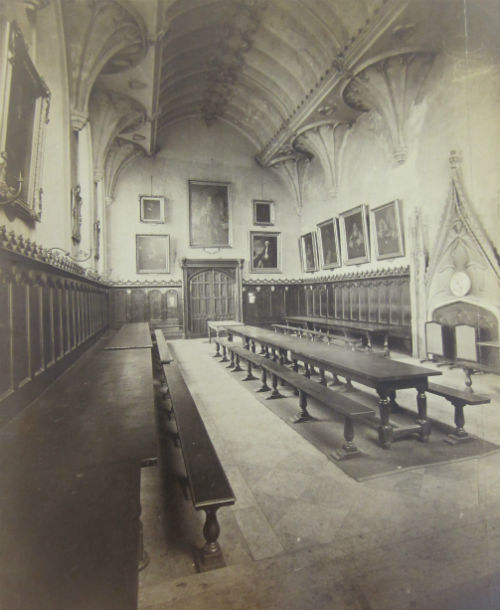 The original 1650s hammerbeam roof has been completely concealed beneath a plaster ceiling filled with ornate fan vaulting, and a richly decorated fireplace and new panelling have been installed.

The Georgians were delighted with this interior, arguably the earliest substantial example of the Gothic Revival in Oxford, and for a while Univ’s transformed Hall became a popular tourist attraction. The Victorians, however, hated it. For them, this interior was, in historical terms, wildly inaccurate, and the ceiling was merely ornamental and had no structural use.

A chance to re-evaluate the Hall came in the early 20th century, when the College decided to lengthen it to the west, beyond the oriel window. Examination of the area above the ceiling showed that the original roof was in reasonable condition, and so it was decided to go back to the 1650s: Keene’s ceiling would be removed; the old roof revealed and restored; and the extension would be built in the style of the 1650s. At the same time, the 1766 panelling would be replaced, and the fireplace covered over. Henry Wilkinson Moore, who designed Kybald House and Durham Buildings, was the architect in charge of the project.

You can now see that the photographer has unwittingly caught the Hall at the precise time when the new extension is now complete, albeit bare of any ornamentation, whilst Keene’s decoration is still intact. This is almost certainly the last photograph of the Hall to show this work, because later on in 1904 Keene’s ceiling was destroyed, his panelling removed, and his fireplace covered up. Here is a photograph of the freshly refurbished Hall, taken very soon after work was complete (ref. UC:P32/P1/1): 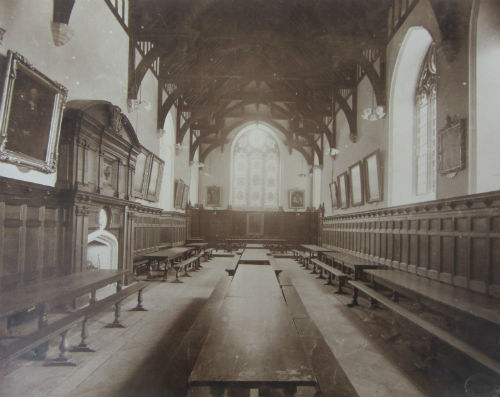 Not everything from 1766 is lost: Keene’s roundel of King Alfred on the fireplace still survives, and some of the panelling was reinstalled in the Payne Room, in the Senior Common Room. The rights and wrongs of the College’s decision over a hundred years ago will continue to be debated, but it cannot be denied that revealing the original roof back to its full height does suit the overall proportions of the Hall rather better.

But we should remember that this photograph represents the 1904 Second Torpid’s special night, and to them we should return. It is very hard not to look at these photographs and not wonder what happened to the crew ten years later. Sadly, we do know what happened next, for two of them did lose their lives in the First World War. Alexander Milne was killed at Gallipoli on 7 August 1915, and Harold Terry was killed at Arras on 28 June 1917. Neither man has a known grave.

This month’s Treasure is a modest volume containing…