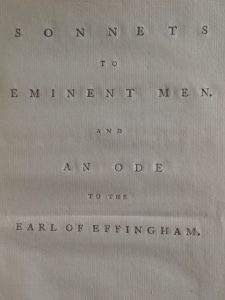 This month’s Treasure is a modest volume containing Sonnets to Eminent Men (see Fig. 1). Published anonymously in 1783, it was written by an Old Member of Univ, Edmund Cartwright (1743-1823).

Having entered Univ in 1760, Cartwright migrated to Magdalen College in 1762 where he was elected a Demy, or Scholar. He was then elected a Fellow of Magdalen in 1764, the same year in which he took his BA degree. Although primarily a practising clergyman who took the DD degree in 1806, he was a man of many interests and is often known now for his literary and scientific endeavours. 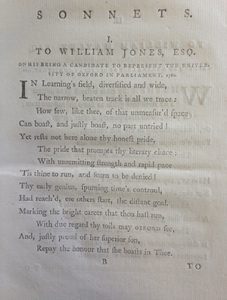 Contributing regularly to the Monthly Review and publishing works including a collection of poems and a treatise on the American Civil War, Cartwright’s interests took a scientific turn in 1784. After a chance visit to Matlock, home to the cotton mills of Sir Richard Arkwright (1732-1792), he became interested in the potential to mechanise weaving and is credited with inventing the power-loom. In the years that followed, Cartwright pursued his scientific interests, obtaining patents for machines including those for rope-making and wool-combing.

In his sonnets, Cartwright praises six eminent men including the poet and biographer William Hayley (1745-1820); the Bishop of Durham, Doctor Thomas Thurlow; and the politician and Third Duke of Richmond, Charles Lennox (1735-1806). In his very first however, he honours another Univ man, Sir William Jones (1746-1794), on his being candidate to represent the University of Oxford in parliament in 1780 (see Fig. 2). 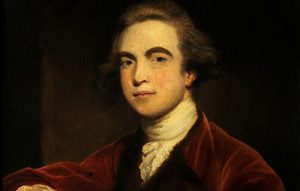 Although Jones’ attempt at parliament was unsuccessful, he received a knighthood and was appointed judge of the Supreme Court in Bengal in 1783. His portrait, painted by John Linnell (1792-1882) after an original by Sir Joshua Reynolds (1723-1782), now hangs in College (see Fig. 3).

Originally given by Cartwright to an Edward Manners, the author’s original inscription can still be seen today (see Fig. 4). It is joined by the typescript notes of Sir Michael Sadler (Master, 1923-1934) who researched the volume and its author before donating it to the College in 1932. So, for such a seemingly humble book, this Treasure reveals a wealth of fascinating Univ connections. 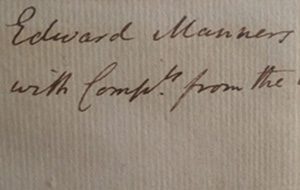