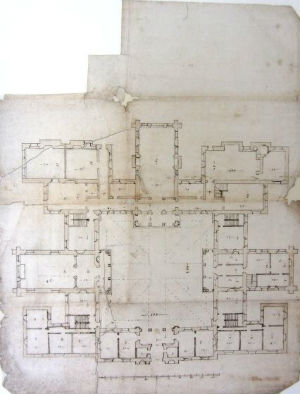 A few months ago, we included as a Univ treasure our remarkable architect’s model of the Main Quad (see October, 2013 Treasure), dating from the 1630s, thought to be the oldest model of its kind in this country. As well as the model, Univ’s archives include several original plans of the Main Quad. However, there are also a few plans which show that we could have had something very different constructed here in the 1630s and 1640s.

First of all, there was an alternative proposal for a completely different Main Quad (Fig. 1).

As you look at it, High Street runs along the bottom of the plan. The Chapel was situated in the left-hand (east) range, with a little Antechapel at the west end, and the Hall was on the top (north) range. The other rooms were all intended for the use of students and Fellows.

We don’t know the identity of the architect of this design. However, he was certainly possessed of great daring: whereas the other design for the Main Quad followed Oxford tradition in looking backwards to the Gothic style, this design was far more modern. Here was a quadrangle in which  there were classical porticos leading into the Hall, the Chapel, and the entrance to the rooms facing the Chapel. Indeed, Sir Howard Colvin, in his book Unbuilt Oxford, says that this proposal is“by far the earliest known design for an Oxford or Cambridge College that is consistently classical in style” (p. 12). 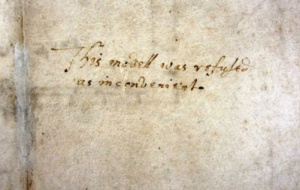 Nevertheless, the Governing Body was unimpressed with this early flirtation with classicism. Fig. 2 has a comment in the hand of Thomas Walker, our then Master, that was written on the back of the plan.

“Inconvenient” in the 1630s tended to mean “unsuitable”, which is probably what Walker meant here. Evidently, Walker and his colleagues were somewhat nervous of such modernity, and felt more at home with the rather more traditional design which the College adopted. However, the plan was also “inconvenient” in the modern sense. Even Colvin (loc. cit.) had to admit that “the plan as a whole is awkward and uneconomical both of space and of building material.” From the first, the College would have known that they would have to build their new quad in instalments, partly for financial reasons, and partly so that parts of the old quad could still remain in use until the project was complete. The design which won, with its four simple ranges, was much easier to build in stages than this very complex building. 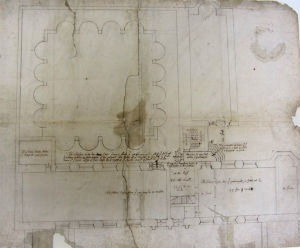 Even after Thomas Walker and the Fellows had selected their choice of quadrangle, there was still room to consider proposed modifications to it. The most significant such proposal is seen at Fig. 3, for a little cloister, dating from the late 1630s.

The cloister would have been placed to the south of the Chapel and the east of the Kitchen block – exactly where the current Buttery now stands. The project was thought through in detail: the notes on this plan show that they planned to make the level of the cloister two foot lower than the level of the quadrangle, with steps leading down to it from the Chapel itself and from the passageway to the Kitchen. There would also have been space for a little vestry to the south side of the east end of the Chapel.

This cloister would have offered a place for Fellows and students to take exercise, not least during wet weather, but it is at least possible that it might, like the cloister at New College, have been used as a burial ground

Univ’s cloister might well have been a charming addition to the Main Quad project of the 1630s, but, sadly, nothing ever came of it: all building work in Univ had to stop with the outbreak of civil war in 1642, and when work started in earnest after 1660 to finish the quadrangle, it proved hard enough work just to raise the funds to complete the Chapel, the kitchen block, and the east side of the Main Quad. The cloister was evidently set aside as too expensive a luxury.