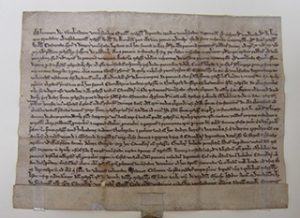 University College was founded thanks to a bequest made by William of Durham, a scholar who had taught theology at the University of Paris, and later became Rector of Bishopwearmouth (now part of Sunderland).

William died in 1249, leaving just over £200 to the University to be invested in property to support Masters of Arts who wanted to study theology. The University of Paris already had several Colleges, which supported students who could not otherwise afford to study, and William was hoping that Oxford would follow Paris’s example. This is the earliest example of such an endowment being made in Oxford; before that date, its members merely rented accommodation in the town, having to pay their own way.

Unfortunately, the University of Oxford mishandled William’s bequest. Although it did buy some houses, it loaned over half of the money to what this document sheepishly calls “certain magnates of the realm”, who never gave it back. The magnates were probably Simon de Montfort and his supporters, who held a Parliament in Oxford in 1258, during their struggle with King Henry III.

Finally, almost thirty years after William’s death, his executors obliged the University to do something, and these statutes resulted. They are undated, but were written when Henry de Stanton was Chancellor, which was in 1280–1. The seal is that of the University of Oxford.

The statutes first tell the story of William’s will (you should be able to spot “magistri Willelmi de Dunelm” in the second line), but also tell how the University lost much of his bequest, and now agrees to pass over to the new institution the properties bought with the remainder.

The statutes say that William had hoped that his bequest would support 10–12 Fellows, but his depleted endowment could now only support 4. They then set out the size of the Fellows’ stipends, the administration of their finances, and how they were to be selected.

View or download PDFs of a transcription of the statutes or their English translation.

Founded by Greek settlers in the 6th century BC…

One would think that in a College like Univ…