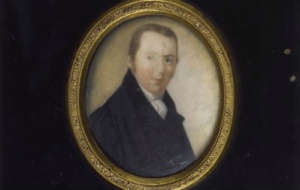 James Griffith was Master of Univ from 1808-1821. If he is remembered for anything today, it is that he was the Master of this College when Percy Bysshe Shelley was sent down in March 1811 for “contumaciously refusing”, as the College Register put it, to say whether or not he wrote the pamphlet “The Necessity of Atheism”. However, there was more to him than that: in particular, he showed an interest in the arts unusual for an academic of his generation.

Griffith was born in County Durham, and originally came up to Corpus Christi College in 1777 aged 16. In 1782, when still only 21 years old, he was elected a Fellow of Univ. The miniature portrait of James Griffith as a young man was recently acquired by the College. 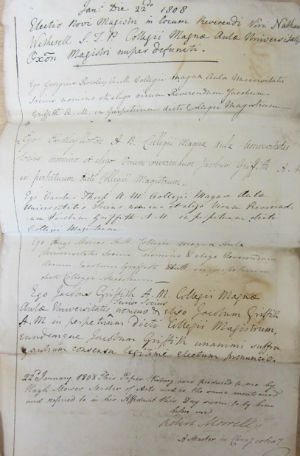 Griffith was elected Master on 22 January 1808

Griffith was elected Master on 22 January 1808. Here, to the right, is the formal record of that election, signed by all the Fellows. The election was unanimous: even Griffith voted for himself. In all fairness, however, Griffith was the best candidate available. He was now the senior Fellow within the College, and he had played a major role in its administration in recent years.

While still a Fellow, Griffith had twice been involved in major architectural projects within the College. The first  dates from 1798, and is a proposal for a new Master’s Lodgings. Griffith’s predecessor as Master, Nathan Wetherell, had decided that the current Master’s Lodgings (now Staircases XI and XII in Radcliffe Quadrangle) were unsatisfactory. The College Register reports his complaints: “the arrangement of the Master’s Lodgings is very inconvenient … there are no good habitable apartments … there is in the Lodgings no proper kitchen or other sufficient offices for servants.” Griffith was therefore commissioned to design a new Lodgings which would have stood on the site of what is now the Shelley Memorial. 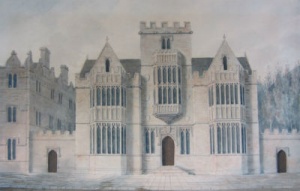 Griffith’s design, seen here to the left, has a typically Georgian symmetry to it, the decoration is all in the latest “Gothick” style, and clearly intended to harmonise with the College’s existing buildings.  The proposal, however, came to nothing, and Wetherell, and then Griffith, had to make do with the existing Lodgings. It was not until the 1870s that the current Lodgings were built.

Griffith’s second College project, however, did come to something. In 1799 and 1800, the College rebuilt the facade of the Chapel and the Hall in the Main Quadrangle, using this design of Griffith’s. Once again, he adopted the “Gothick” style. Sadly, Griffith’s facade was made of poor quality stonework, and had to be replaced in the 1950s by the current facade, designed by Stephen Dykes Bower. 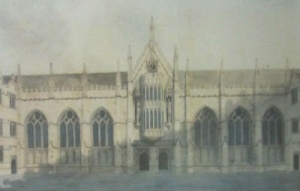 Facade of Chapel and Hall

Univ during Griffith’s Mastership was something of a backwater, and Griffith himself took little interest in university politics. He also found himself in a difficult position when having to expel Shelley: it is clear that he and the Fellows were encouraging Shelley to deny authorship of his atheistical pamphlet, so that no more need be said about it, but Shelley refused to play along with this, and was expelled as a result.

Fortunately, at least one sympathetic portrait of Griffith is preserved for us. His wife’s niece, Elizabeth Grant, and her sister stayed in the Master’s Lodgings in 1810, and described her time there in her autobiography, “Memoirs of a Highland Lady”. Grant evidently adored her uncle, not least because of the afternoon walks he shared with the girls. Grant remembers: “How we skipt upstairs for our bonnets when my Uncle proposed to walk out with us. … The moment we were out of the town, away we raced just as we liked, … along the London road, nay round the Christ Church meadows. … Sometimes our walks with him were quieter. He took us into the different Colleges, to shew us the hall of one, the stained glass windows of another, the Chapel of a third. He told us the histories of the founders, with the dates of their times, and he gave us short sketches of the manners of those days … He had an immensity of fun in him.” (E. Grant, Memoirs of a Highland Lady, ed. A. Tod (Edinburgh, 1992), i. 158-9). 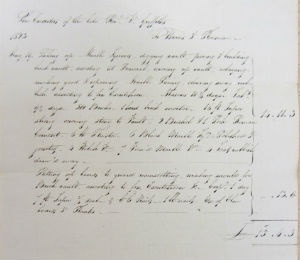 James Griffith died on 11 May 1821 in the Master’s Lodgings, and was buried under the altar of the College Chapel, where he still lies. Here, to the left, is the bill for digging his grave there, which involved having to create a special vault for him.

In 1927, in an early attempt to capture the coveted Christmas…