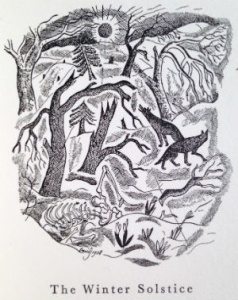 In 1927, in an early attempt to capture the coveted Christmas market, the publisher Faber & Gwyer (later Faber & Faber) launched a series of poetry pamphlets designed to be sent as Christmas cards. Major writers of the day were asked to write a new poem on a seasonal or Christmas-related subject and a young jobbing artist was chosen to illustrate each poem. The series of pamphlets, called ‘The Ariel Poems’ consist of only a few pages; just one poem and one or two illustrations.

The list of contributors, both writers and artists, reads like a who’s who of the interwar literary and artistic scene: T.S. Eliot, Thomas Hardy, Walter de la Mare, Paul Nash, Charles Ricketts, and Eric Gill, to name just a few. The success of The Ariel Poems in linking word and image helped to establish Faber & Faber as a major literary publishing house. 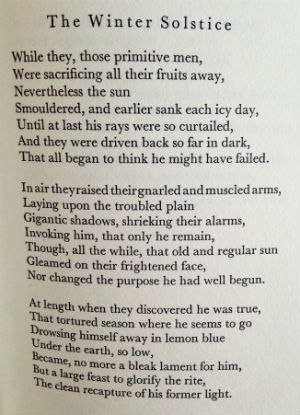 The Univ Library has an impressive fifteen out of thirty-eight of The Ariel Poems, thanks to an Old Member who bequeathed his collection of books to us in 1971. Dr Erich Adolph Alport came up to Univ in 1926, having been raised in Hamburg. After leaving Univ, Alport decided to build his life in England and along with his mother, an avid art collector, became entrenched in the literary and artistic scene of the time. His friends included T.S. Eliot, Paul Bowles, Stephen Spender, and W.H. Auden. Many of the volumes in Alport’s collection were given to him by their authors and personal inscriptions from them are not uncommon. Alport’s interest in art, design, and literature led to a notable collection of fine press material, one of which is featured here.

The thirteenth number of The Ariel Poems was published in 1928; The Winter Solstice, by Harold Monro (Figs. 2 and 4). As well as being an established poet in his own right (his first volume was published in 1906), Monro was the proprietor of the Poetry Bookshop in Bloomsbury, London which opened in December 1912. The Bookshop had its origin in the three years that Monro spent on the continent experimenting with alternative lifestyles. It was during this time that he set himself the goal of finding and publicising the poets of the future. He went on to present to the public such notable figures as Wilfred Owen, Robert Frost, and Robert Graves. 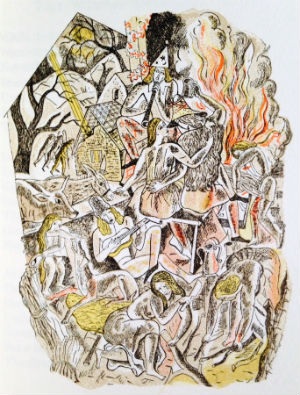 David Michael Jones, also known as Dai Greatcoat, was selected by Faber & Gwyer to interpret Monro’s poem (Figs. 1 and 3). Although he never wrote any of The Ariel Poems, Jones was acclaimed as both a writer and an artist. He was one of the sixteen Great War poets commemorated on Westminster Abbey’s Poet’s Corner. Jones joined the Royal Welch Fusiliers and served on the Western Front from 1915 to 1918 when he was sent home with trench fever. He turned his experience of war into the epic poem In Parenthesis, which won the Hawthornden Prize when it was published in 1937. Prior to the publication of In Parenthesis, Jones had been known solely as a wood engraver and painter. 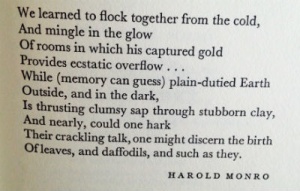 YIO/MON: The Winter Solstice by Harold Monro with drawings by David Jones (London: Faber & Gwyer Ltd, 1928). The Ariel Poems, No. 13: Large paper edition: 500 copies. This is number 76 [signed by the author].