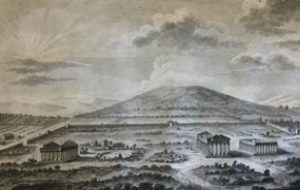 Following our April, 2017 Treasure, this month we take a closer look at the Ruins of Paestum. Recently exhibited in College, this spectacular book caught the attention of Univ’s Fellow Librarian and enthusiast Professor Nicholas Halmi who kindly discusses its significance below.

“Though visible from the sea, the large structures [at Paestum] attracted little attention until the middle of the eighteenth century, with the growth of archaeological interest in classical antiquity. In 1750 the French architects Gabriel-Pierre Dumont and Jacques-Germain Soufflot visited the site, as did the German antiquarian and art historian Johann Joachim Winckelmann eight years later. But publication about the temples began only in the 1760s: first a little-noticed set of inaccurate engravings by Dumont in 1764, then six engravings (even less noticed) by one Antonio Jolli in 1765, a minimally illustrated but textually informative study by John Berkenhout in 1767, and finally Thomas Major’s Ruins of Paestum otherwise Posidonia in Magna Graecia in 1768. Though later eclipsed in fame by the great engraver Giovanni Battista Piranesi’s atmospheric Différentes Vues de Pesto (published after his death in 1778 by Piranesi’s son Francesco), Major’s book, published simultaneously in French and English, was the earliest publication to disseminate a knowledge of the Paestum temples to a wider public. 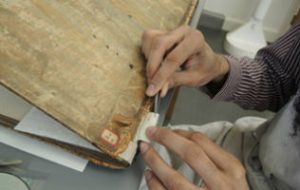 Remarkably, Major himself never visited Paestum, his engravings (see above) being based on measured drawings commissioned by Soufflot and Count Felice Gazzola, an engineer in the service of the Neapolitan monarchy. That the engravings were at two removes from the buildings they depicted did nothing to diminish their significance, however, in conveying the Greek Doric order, with its squat and relatively unadorned columns, to a public accustomed to the slenderer and more ornate Roman orders—a shock that Goethe experienced first-hand when he visited the site in 1787 and found the temples “oppressive and horrible”. The influence of the Paestum temples on neoclassical architecture throughout Europe was profound, and can be seen even near Univ, where Bostar Hall (86–7 High Street) was given a new front with seven columns in the Greek Doric order sometime in the 1820s, when it was still owned by Magdalen College.’ 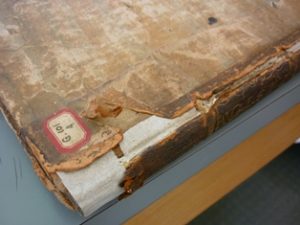 Interesting and beautiful but in a somewhat tired and fragile state, the volume was sent by Librarian Elizabeth Adams to the Oxford Conservation Consortium for treatment. Book Conservator Jasdip Dhillon soon got to work repairing and cleaning the damage. His summary of the work provides another fascinating insight into the wonderful world of conservation.

“The conservation treatment of the volume was focused on the repairing of a detached board and a splitting textblock. The type of damage seen on the book was typical of books made up primarily of single-sheet plates. Traditionally, such books were bound using a method known as overcasting and oversewing. Unlike most historical western books which are made up of folded sections which are sewn through the fold, books made up of single-sheet plates are first stitched (overcast) into gatherings before being sewn together as a book. Owing to the large size and weight of the volumes, the books are prone to splitting between gatherings and The Ruins of Paestum was splitting in at least one point. Additionally the thin leather on the spine had broken completely along the left joint and the cord sewing supports were also broken. 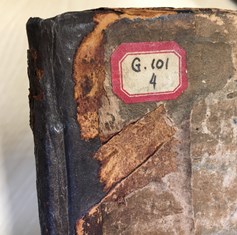 Linen lining at the head and tail of the spine

The conservation of the volume first involved the adhering of a linen lining at the head and tail of the spine in order to repair the textblock breaks and provide a secure board attachment (see image). This was followed by the attachment of seven internal hinges made of linen and Japanese paper. These were adhered between the broken sewing cords and were also pasted on the outer face of the boards. The joint was further stabilised by a Japanese paper hinge on the inside of the board. Finally a heavier Japanese paper, toned carefully with liquid acrylic paints to match the original leather, was used to cover all repairs (see below). The result was a book which could be viewed safely and appreciated for its aesthetic quality without significantly altering the overall appearance or historical structure.”

Looking much happier, The Ruins of Paestum is now back at Univ for future generations to appreciate and admire.

Founded by Greek settlers in the 6th century BC…

One would think that in a College like Univ…