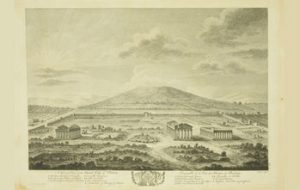 The subject of this month’s Treasure is a volume of beautiful engravings depicting the ruins of Paestum.

Founded by Greek settlers in the 6th century BC in southern Italy, Paestum was originally named Poseidonia after Poseidon, the Greek God of the Sea. Subsequently called Paistos by the Lucanians, the city fell to the Romans in 273 BC, whereupon it was renamed Paestum. 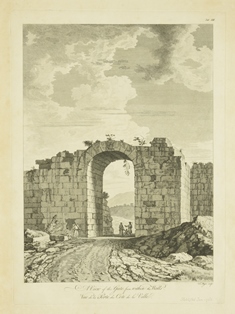 Abandoned during the Middle Ages and largely untouched, Paestum’s ruined temples later made it a popular destination on the 18th century Grand Tour. Indeed, countless authors and artists captured its beauty in poetry and prose, paintings, drawings, and engravings.

The Ruins of Paestum was produced by Thomas Major (1720-99), an English engraver who published prolifically from the middle of the 18th century; perhaps in an attempt to support his wife and the 16 children born to them between 1752 and 1771! Published in 1768, it followed the publication of two similar volumes on the ruins at Palmyra in Syria (1753) and Baalbec in Lebanon (1757). Although he never saw the ruins himself, Major produced the 25 beautiful engravings of Paestum based on paintings and drawings by other artists. As he notes in his introduction, his historical account of the city was also based on the works of other authors.

Univ appears frequently in the list of subscribers with the Rev. John Alleyne (1731/2-92) and the Rev. Dr. Nathan Wetherell (1726-1807) both present. Alleyne was an undergraduate and Fellow (1754-80) and, amongst the many offices he held during his tenure, was Librarian for the year beginning March 1767. Wetherell remains the College’s longest serving Master, occupying the position for over 40 years from 1764 to 1807. 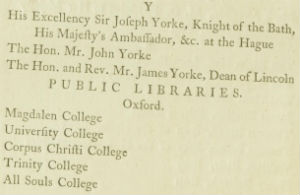 The College itself is also named (see left) and accounts for the financial year beginning March 1765 clearly record a payment for the volume. Corpus Christi and Magdalen Colleges also subscribed although they do not appear to have their copies today.

Upon its return from a recent exhibition for a conference organised by Univ’s Dr Laura Varnam, our copy underwent conservation at the Oxford Conservation Consortium, of which the College is a member. We will take a closer look at the conservation of The Ruins of Paestum in a future Treasure so watch this space.

2016 has been a year of centenaries in relation…