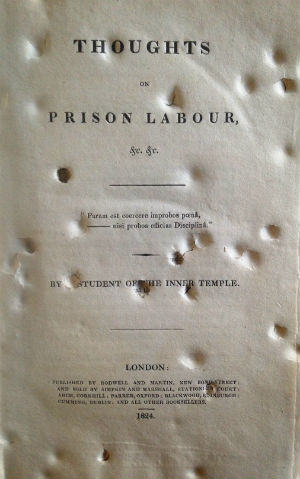 The Univ Library does not regularly purchase early material but the intriguing volume featured in this month’s Treasure was a recent exception.

An Old Member, who now works at the National Library of Scotland, alerted us to the sale of a fascinating book with Univ connections. The book, published just one year after the Gaols Act of 1823, is rare: Thoughts on Prison Labour by a Student of the Inner Temple, printed in London in 1824 (see Fig.1).

The text tells us that tread-wheels, installed in prisons from 1820, were wooden structures in which as many as 320 men or women were put to work to raise water or grind grain. By 1824 there were 24 British prisons which used the tread-wheel as a form of hard labour for both men and women. The author of the volume is against their use; he first argues that the tread-wheel was introduced illegally, without being put through the correct legal channels. Secondly, he suggests that excessive use of tread-wheels brutalised inmates, leading to further crime. Thirdly, he believes that working the tread-wheel is too hard for the bodies and minds of the average prisoner. 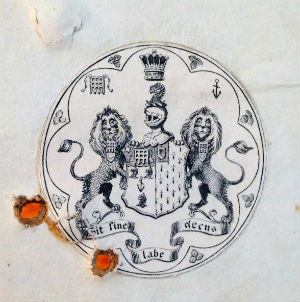 Univ’s connection with the volumes is evident as soon as it is opened. The bookplate of our alumnus John Scott, Lord Eldon has been pasted to the inside of the upper cover (see Fig. 2). Lord Eldon followed his elder brother William to Univ, matriculating in 1766. Only a year later he was elected a Fellow. Eldon still holds the record for Univ’s youngest known Fellow, at the age of sixteen.

Lord Eldon was not, however, a Fellow for very long. In 1772 he eloped with a young lady from Newcastle; liberating her with a ladder from her first-floor window. The couple hastened to Scotland and were wed. Unusually, Eldon was allowed to return to Univ as a Tutor, even after his resignation. 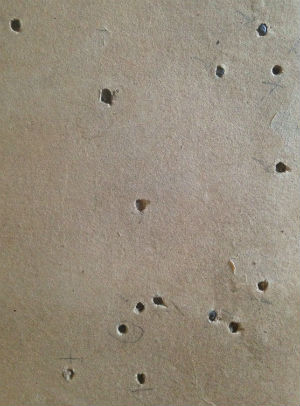 As well as its Univ provenance, the volume is remarkable in that it has been peppered with buckshot, many of which can still be seen embedded in the boards (see Fig. 3). Eldon, who served two stints as Lord Chancellor, was a keen sportsman but not a very good marksman. His brother, Lord Stowell, said that the only thing Eldon killed when out shooting was time.

Although we can’t know that it was Lord Eldon himself who used the book for target practice (and we certainly wouldn’t condone such vandalism), we are very happy to have added it to our collections.

2016 has been a year of centenaries in relation…