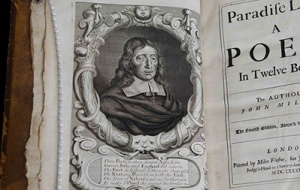 Originally published in 1667, John Milton’s Paradise Lost is an epic poem that retells the story of the Fall of Man. With its portrayal of God and Satan, and its detailed depiction of the cosmos, it has become one of the most influential poems in English literature. In Univ’s copy of the first illustrated edition, published in 1688, Milton’s vision is spectacularly brought to life.

Born in 1608 and educated at Christ’s College Cambridge, John Milton was a renowned poet and polemicist in a period of great political and religious unrest (see Fig.1, above).  An official in Oliver Cromwell’s Republic, his political allegiances forced him into hiding after the restoration of Charles II, and later resulted in his arrest and imprisonment.  Despite this interruption and becoming permanently blind in the early 1650s however, Milton produced many political and theological works as well as numerous poems. 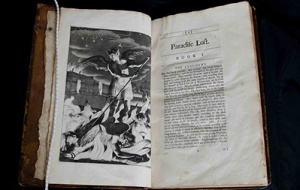 Milton began Paradise Lost in 1658 prior to his imprisonment and completed it in 1663.  Following a brief account of Man’s Fall, he takes up the story with Satan and his angels lying on Hell’s burning lake, and closes the poem with the angel Michael leading Adam and Eve out of Paradise.

Whilst early editions did not sell quickly, the fourth edition published in 1688 by Tonson and Bently, established the poem’s reputation as one of the great works of English literature.  One of the first books to be sold by subscription, this edition contains thirteen ornate engravings depicting the author and scenes from the poem.  The illustrator was John Baptist Medina (1659-1710), a Spanish artist deeply influenced by Rubens, and all but two of the designs were engraved by the Dutch artist Michael Burghers (1647/8-1727). 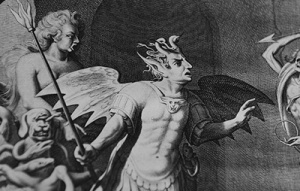 Particularly remarkable is the plate to Book I, with its stunning chiaroscuro, showing Satan starkly lit by flames as he leans on his spear over Hell’s burning lake with the host of rebel angels prostrate before him (see Fig.2, above).  The exquisite level of detail in the illustrations is also clear to see with a close look at Satan in the plate accompanying Book II (see Fig.3, left).

Funeral procession of Elizabeth I