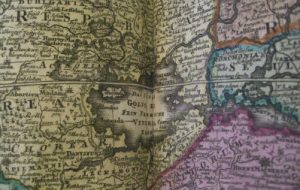 This month’s treasure is one of Univ’s most unusual and intriguing maps. Published in Nuremberg in the late 17th or early 18th century, it contains hand-painted illustrations in yellow, green, pink and brown and has subsequently been bound together with fifty other maps. Upon first glance, one could be easily be forgiven for thinking the map is just another fine example of an ordinary seventeenth century world map. However, a closer inspection shows that it is one of the first of the so-called Scharrafenland maps and is thus quite extraordinary. 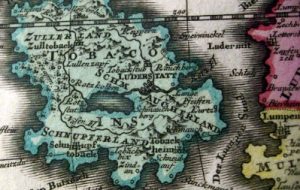 Also known as Cockaigne, Scharrafenland is a Utopian Land of Milk and Honey, rife with vice and indulgence. Known throughout folklore and popularised by renowned German cartographers, Johann Baptist Hormann (1664-1724) and Matthaeus Seutter (1678-1757), it centres around The Sea of Lust (Venerea Meer) (see Fig. 1) and is divided into 19 regions including the Kingdom of Extravagence (Prodigali Regnum), the Empire of Fat Stomachs (Magni Stomachi Imperium), the Land of Drink (Bibonia), and the Land of Quarrels (Litigonia). 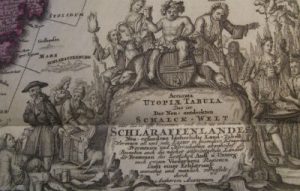 Islands and seas are also depicted including Smoking Land (Scmauchland) and Snuff Land (Schnupferland) (see Fig. 2), and the Islands of Necromancy (Insulae Necromanticae), and Spongers (Schmarotz Insula), set in the Seas of Trollops (Luder Meer) and Drunkeness (Mare Ebrium). Personifications of vices such as debauchery, drunkenness and gluttony also adorn the map’s title cartouche and add to this comic representation of human folly (see Fig. 3). 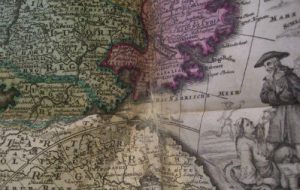 At the top of the map, the bright beacon of the Holy City of New Jerusalem lights up the land of Terra Sancta Incognita or the Unknown Land of the Religious and Pious. Its antithesis, the Ends of the Earth or Hell (Tatari Regnum) (see Fig. 4), lies at the bottom of the map and it is to Hell that all the inhabitants of Schlarraffenland are destined to finish up if they do not reform their ways.