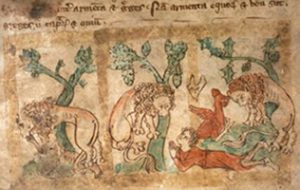 The subject of this month’s Treasure is another of Univ’s medieval manuscripts. As with our earlier Treasures, MS 100: Apocalypse and MS 165: Life of Cuthbert by the Venerable Bede, it is full of beautifully vivid illuminations that bring the text to life.

MS 120 is a fine example of a Bestiary, or Book of Beasts. Bestiaries contain descriptions of beasts or animals (and sometimes plants and stones) both real and imagined. Particularly popular in England in the twelfth and thirteenth centuries, bestiaries evolved from the writings of ancient authors, such as Aristotle and Pliny the Elder, and from a Greek text known as the Physiologus or The Natural Philosopher (Brown, 1994, p. 18). Whereas these earlier texts described animals as features of natural history though, bestiaries became highly religious works full of allegorical descriptions designed to instruct laymen in their moral conduct. 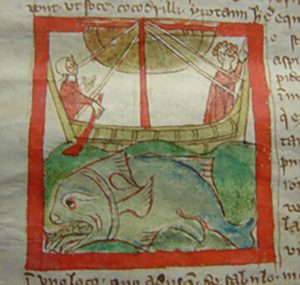 Produced in the early fourteenth century (circa 1300), MS 120 is written on vellum, contains over 100 coloured drawings, and, it is thought, may survive from the College’s medieval library (Hunt, 1950, pp.17).

The manuscript begins with the mighty lion (see above), king of the beasts, who spares the prostrate, and is reportedly only afraid of the cockerel! An array of other animals is then depicted including pelicans, antelope, bees, panthers, and apes; each with their own enlightening and often ominous tale to tell. The whale (see right), for instance, is said to fool sailors into thinking it is an island before dragging them down to their deaths when they land.

Alongside these animals, a captivating collection of more unfamiliar creatures is also described. Beasts such as the bonnacon, basilisk, and dragon all parade before us on the pages of the manuscript; revealing fascinating details of their appearance and habits. Particularly intriguing is the Siren (see below left), half-woman/half- bird or fish, who like the whale lures sailors to their doom, this time by singing to them; and the Manticore (see below right), a fierce creature with the face of a man, the body of a lion, and the tale of a scorpion.

The Siren and the Manticore

The popularity of these beautifully illuminated books during the medieval period is easy to understand when looking at MS 120 and, with its detailed depictions of familiar and unfamiliar creatures, it continues to provide a fascinating insight into the social and religious attitudes of the time.

This intriguing volume was presented to the Library by…