This intriguing volume (Fig. 1.) was presented to the Library by Univ’s Master Arthur Lehman Goodhart (1891-1978). He, in turn, received the book as a token of friendship from Neville Jonas Laski (1890-1969), an alumnus of Corpus Christi College, in 1955. It’s not recorded from whom Laski acquired the book, but a letter kept in the book tells us that it had been sold by Sotheby’s in December 1938 at a huge auction of the collection belonging to the late Mortimer L. Schiff who died in 1931.

The link between these three men, Goodhart, Laski, and Schiff is that they were all Jewish. Goodhart, in fact, was both the first Jew and the first American to be named head of an Oxbridge college. He was also one of Univ’s most generous benefactors, giving his name to the Goodhart Seminar Room and the recently refurbished Goodhart Building. The Alington Room would also have taken his name, were it not for Goodhart’s insistance that it be a memorial to Giles Alington, who died tragically young. In addition, Cecily’s Court is named after Goodhart’s wife and Helen’s Court after his sister. 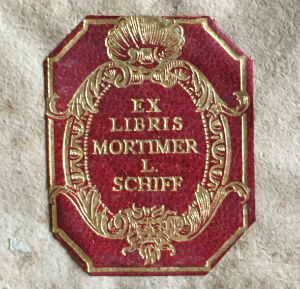 Although Schiff’s gilt tooled book label can be seen on the inside of the upper board (fig. 2), it is the earlier provenance that is more intriguing. Both the title page and the binding of the book are decorated with an armorial device belonging to Françoise Athénaïs de Rochechouart de Mortemart, Marquise de Montespan (fig. 3). Madame de Montespan, as she was known, was one of Louis XIV’s more notorious mistresses. She bore him a total of 7 children, and wielded considerable influence in Court. 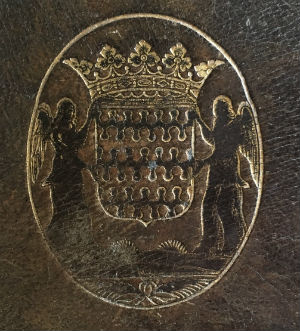 When, after 17 years, she was ousted as the King’s favourite mistress in 1691, Madame de Montespan retired to the Saint-Joseph convent in Paris with a handsome pension. Much of her wealth was donated to charities and she became a patron of the arts and literature. Seven years after she entered the convent this book was printed on her orders; a French translation of the Psalms of David. There is only one other copy of this work (in the Bibliotheque Nationale) and no other book bearing the arms of Madame de Montespan has been identified, making this a very rare gift.