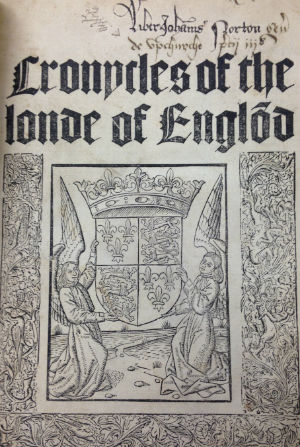 This Treasure is the first in what will become a series featuring Univ’s 15th century printed books, otherwise known as incunables.

The unusual word comes from the Latin, ‘incunabulum’, meaning swaddling clothes, or cradle, and refers to books which were produced during the infancy of Gutenberg’s innovation of printing with movable metal type and a wooden hand press. Gutenberg started printing in this manner in the mid-1450s in Mainz, Germany, but the technology travelled fast, and the book featured here was printed in Antwerp in the year 1493 by a printer called Gerard Leeu. Despite being printed in Belgium, the text is in English and was intended for the English market.

Univ’s Library holds a total of 35 incunables, ranging in date from 1471 to 1500. Until recently, most of these books were kept in the Bodleian Library but over the past few years all of our incunables have been returned to Univ where they can be accessed by students and researchers alike. This volume was deposited with the Bodleian in 1924 due to its rarity: it is not held elsewhere in Oxford and only 9 other copies have been identified in the world.

Books printed at the beginning of the incunable period did not feature title pages as we know them. Instead, the first printed page would begin with the first line of text. This is called an incipit, from the Latin for ‘it begins’. By the time this book was printed in 1493, the beginnings of the modern title page can be seen (Fig. 1, above), although the date of publication and printer’s name are still found only in the colophon, on the final page.

The colophon of this book, which is unfortunately missing from this copy, is particularly intriguing. It explains that the printer, Gerard Leeu, did not live to see the book published, but does not disclose the fact that he was murdered by his type-setter following an argument. The colophon reads:

“In the yere of owr lord M.ccc.xciij By maistir Gerard de Leew, a man of grete wysedom in all maner of kun[n]yng: which nowe is come from lyfe unto the deth which is grete harme for many a poure man.” 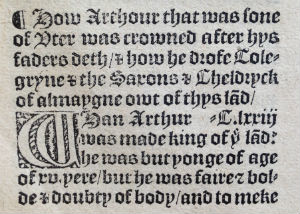 The Chronycles was a very popular text during the incunable period but the tradition dates back to at least the 6th century, with a series authors contributing to the text. First printed by William Caxton in 1480, no less than 12 reprints of the text appeared during the 48 years up until 1528. The book recounts the history of England up until the end of the 15th century. More than 100 English kings are recorded; even the mythological King Arthur makes an appearance (Fig. 2).

The end-leaves of this copy contain an anonymous poem written in a 16th century hand about the marriage of Mary Tudor to Philip of Spain in 1555. Figure 3 shows the start of the poem, transcribed below: 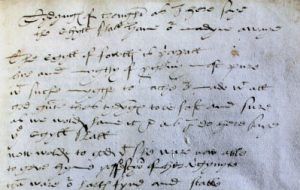 Suarez & Woudhuysen, The Oxford companion to the book (Oxford, 2010).