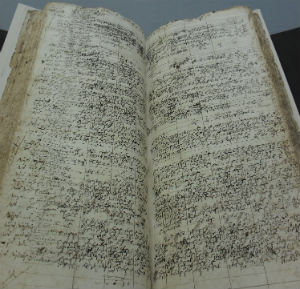 Not every item included in the Treasure of the Month series is a particularly beautiful or striking one. Sometimes, an object can appear rather unattractive at first glance, but on closer inspection can yield up something fascinating.

For January 2016, we have chosen four such “ugly ducklings”, namely Univ.’s earliest Buttery Books, which run from March 1639 to March 1643.

All the older Oxford College archives have Buttery Books. They were created to record the weekly expenditure of their members in the Buttery, and aim to list all the members of a College on a couple of openings, hence their tall and thin appearance. The earliest references to Buttery Books at Univ come from our accounts of the 1570s; they seem to have come into existence at about the same time in other Colleges. 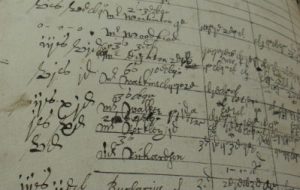 Each pair of openings covers a week’s expenditure (Fig 1). By each name you will see a whole multitude of near-illegible scribblings to record daily expenses, and then the weekly total written alongside (Fig. 2). Almost certainly one of the servants working in the Buttery kept the books. At this time, such a servant could have been an undergraduate who was earning some extra money to pay his way through Oxford.

New members of the College would sign their names at the bottom of the list, and, as they grew more senior and other new members signed in, so their names gradually climbed up. 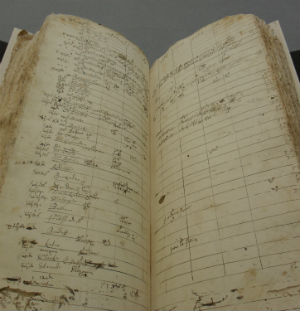 The names of these College members are listed in various groups. The Master and Fellows sit at the top; then the MA’s who are still in College, and then the BA’s, and then finally the undergraduates. The undergraduates are listed in two series, one for the richer ones, and one for the poorer. We think that these divisions might even have been reflected in the tables at which people sat for their meals in Hall.

Such data might appear quite mundane, but the Buttery Books have much to tell us. In particular, because they record people’s expenditure in the Buttery, we can use them to check how many people were living in College at any one time. It is also possible to see how much money individuals were spending in College (the Buttery Books of 1810–11, for example, show that one Percy Shelley was one of the most extravagant students of his year). 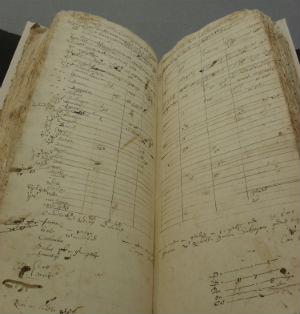 They also tell us who was here at Univ. Our great series of Admissions Registers only start in 1674, so that these Buttery Books are the best source of lists of members of the College before that date.

All this makes the evidence of the Buttery Books for 1639–43 very precious for the history of Univ. This was one of the most turbulent periods in English history. As relations between Charles I and Parliament deteriorated, so the country endured first a period of major political crisis, and then in 1642 outright civil war. These books show what happened at Univ during this time.

In March 1639, Univ comprised a Master, 8 Fellows 8 MA and 10 BA commoners, and 34 undergraduates. These figures remained much the same over the next two years, but only three new undergraduates arrived in the year beginning March 1641, and in August 1641, the College was almost completely emptied for several weeks. 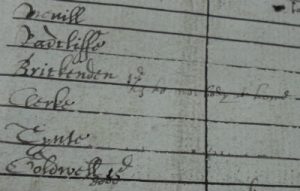 By March 1642, 27 undergraduates were in residence, but this changed in the summer. In late August a group of Royalist troops arrived in Oxford to stay for a couple of weeks, and on their departure a group of Parliamentarians occupied Oxford until early October. On the week of 2 September, the Buttery Books show that almost everyone who could got out of Univ, and within a fortnight the only people left in College were four Fellows, two MA’s, two BA’s, and four undergraduates.This can be seen in Figs 3 and 4 (above), the two openings from the week beginning 9 September. Contrast these images with the busy scribblings visible in Fig. 1. 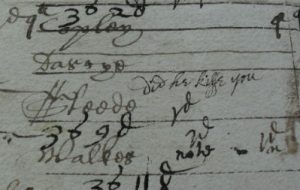 Numbers are one thing. One unexpected aspect of these Buttery Books is that the servants keeping them showed a wry sense of humour. In August 1641, when all the wealthier members of College had left, someone wrote in the Buttery Book “hy hoe noe body at home” (Fig. 5, above).

There were also jokes at the expense of individual students. In the summer of 1640, for example, someone wrote alongside one William Stede (matr. 1637) the words “did he kisse you” (Fig. 6). 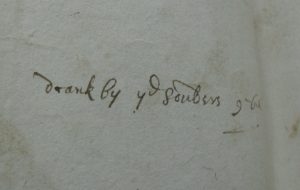 Fig.7 “drank by the soulders”

The comments grew more serious in the shadow of war. In the weeks of 9 and 16 September 1642 the Buttery Books recorded sums “drank by the soulders” (Fig. 7, left), and in the week of 7 October 1642 someone scribbled in “billet our ten men or else” (Fig. 8). Whether or not this last comment recorded a verbatim (Parliamentarian) threat or not, it evokes the tense atmosphere of the time. 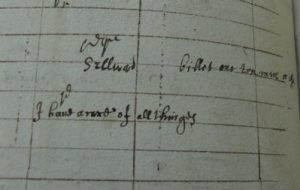 Fig.8 “billet our ten men or else”

In the autumn of 1642, Charles I took up residence in Christ Church, and his court came to Oxford too, taking rooms in all the empty Colleges. This is reflected in our Buttery Books, as a whole group of new names appear, who must be courtiers of the King. Here is part of the entry for the week beginning 2 December 1642 (Fig. 9), which shows a whole lot of extra names. One or two of them are Old Members of Univ, such as Sir Francis Carewe, who had come up here in 1619, and now returned in November 1642. 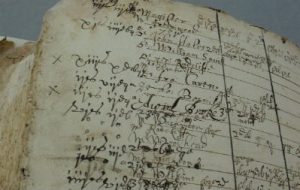 These four early Buttery Books of Univ, therefore, provide unique evidence for what it meant to be a member of this College during these tumultuous times. However, by the turn of the millennium, they were in very poor condition, and in dire need of repair. The Oxford Conservation Consortium has just finished a major project to clean, repair, and rebind them. If you go to this page, you can read about the work that has been carried out on them.

John Browne, the subject of this month’s Treasure, is one…