John Browne, the subject of this month’s Treasure, is one of Univ’s more obscure Masters. Although his time at Univ spanned a period of 60 years (from his matriculation in 1704 to his death in 1764) ‘no collection of his papers exists; no diarist or writer of memoirs is known to have alluded to him; and no portrait survives.’[1] On his death, Browne bequeathed to Univ a house on Logic Lane and an estate in Buckinghamshire, as well as a collection of some 1300 books, which are listed in his will as follows:

“Also I give and bequeath to the Master and Fellows of University College aforesaid All my Library of Books now in my Lodgings in the said College to be used and enjoyed by the Master of the said College for the time being and to be kept in his Lodgings and to be esteemed and go with them as and in the manner of Heir looms.”

When Browne wrote his will in 1763 the Master’s Lodgings ranged along the east side of the Radcliffe Quadrangle where the Academic and IT offices are today. When more space was needed for student accommodation in the 1870’s a new building was proposed for the Lodgings. The brief which the architects, Bodley & Garner, were given merely stipulated that the new building should, as indicated by Browne’s will, include a room to house the Browne Library.[2] In that sense the new Masters’ Lodgings was designed around the existing book-shelves of the Browne Library and the collection was moved intact (fig.1).

John Browne was not noted as an antiquarian, didn’t publish anything himself, and wasn’t known to move in scholarly circles. Why he might have been in possession of such a large collection of books at his death has only been explored in the last few years as part of the research required to catalogue the collection to modern standards. 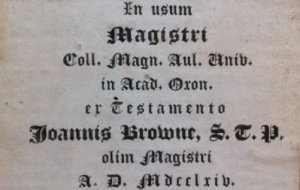 All the volumes in the Browne Library contain a bookplate which records the bequest. Curiously, many of the books reveal another bookplate (fig.2), often wholly or partially covered by that of Browne. This additional plate belongs to Arthur Charlett, another of Univ’s Masters. Charlett, unlike Browne, was very much an antiquarian and a known collector of books. It was always assumed, and indeed expected, that Charlett would bequeath his collection to College, but when he died intestate, his collection was thought to have been dispersed[3].

The situation in Univ following Charlett’s death in 1722 throws some light on how many of his books ended up in Browne’s collection. Charlett’s tendency to favouritism and his ability to breed division in College led to a dispute over his successor as Master of Univ. During his last years Charlett favoured William Denison as the next Master, but Thomas Cockman also had many supporters, including John Browne. Before the dispute was settled, Thomas Cockman and his supporters managed to occupy the Master’s Lodgings, presumably giving Browne access to Charlett’s books.

There are questions still to be answered, not least regarding the precise circumstances which led to Browne’s acquisition of many of Charlett’s books. Further research into this collection will be published in future Univ Treasures.