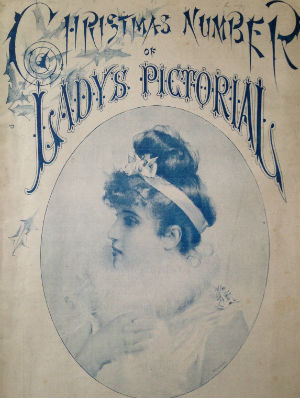 With preparations for Christmas now in full swing, this month’s treasure looks at three Christmas Numbers of The Lady’s Pictorial, to see what Victorian women were reading, buying, and wearing in the festive seasons of the late 1880s.

First issued in September 1880, the Lady’s Pictorial was produced by Alfred Gibbons as a rival to the already popular women’s magazine, the Queen. Beginning as a monthly, illustrated newspaper, it soon became a weekly, before expanding significantly in 1884 with the arrival of brothers William and Charles Ingram, owners of the Illustrated London News.

Aimed at the middle-classes and published until 1921 when it merged with Eve, it is one of the longer lasting of the many periodicals that emerged in the late nineteenth century. It is also particularly significant because of its enlightened approach to editorial content; including articles on important issues such as women’s employment, as well as the usual society and fashion reviews. The newspaper also employed large numbers of women on its staff and, whilst some still preferred to write under pseudonyms, many signed their work with their own names. 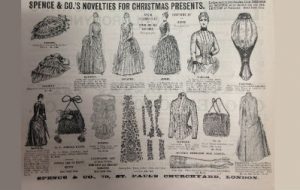 Over the years, the Lady’s Pictorial published articles, poems, and short stories by many notable authors including Oscar Wilde, whose works appear in each of Univ’s copies which date from 1887 to 1889. Indeed the newspaper is preserved at Univ as part of the Robert Ross Memorial Collection discussed in previous treasures. However, the newspaper, particularly its special Summer and Christmas numbers, became known for many big names including authors Ella Hepworth Dixon, Rhoda Broughton, and Margaret Oliphant, and illustrators Dudley Hardy, J. Bernard Partridge, and F. H. Townsend. 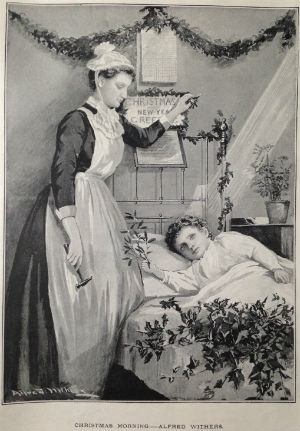 Each issue is a fascinating read with striking illustrations and pages of contemporary advertisements, that provide some insight into the life of a typical middle-class, Victorian woman. On show here are just a few of the highlights: the cover of the Christmas Number for 1888, decorated with holly (Fig. 1); an advertisement for ladies fashions in the 1887 number (Fig. 2); and an illustration by Alfred Withers (1856-1932) of “Christmas Morning” in the 1889 (Fig. 3).