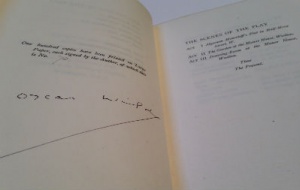 This month’s Univ Treasure takes a look at one of Oscar Wilde’s best known and most loved plays, The Importance of Being Earnest; first performed on Valentine’s Day 1895.

Idle bachelors John (“Jack”) Worthing and Algernon Moncrieff, each lead double lives: Jack escaping the country under the pretence of visiting his unruly younger brother Ernest in town, and Algernon avoiding unpleasant social engagements by pretending to visit his sick friend Bunbury in the country.  When Jack reveals his intention to marry Algernon’s cousin Gwendolen (who believes Jack is actually Ernest), his secret is exposed along with his ward, Cecily.  Keen to become acquainted with Cecily, Algernon visits the country as the imaginary Ernest.  Romantic comedy ensues as Cecily and Gwendolen, equally attached to the name Ernest, believe they are engaged to the same man before everything is resolved and each couple happily united. 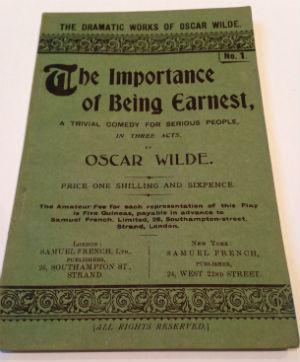 Originally written in four acts and reduced to three for performance, The Importance of Being Earnest was premiered at the St. James’ Theatre, London.  Under the direction of George Alexander, actor and manager of the St. James’ Theatre, the play charmed audiences and met with critical acclaim although some, including George Bernard Shaw, remained unconvinced (see Wilde, O. & Raby, 1998, p. xxiii).

As well as being a professional triumph, the opening night of the play also proved personally significant for Wilde, as it was at this performance that the Marquess of Queensberry intended to present him with a bouquet of rotten vegetables.  Although this unpleasant encounter was prevented, it marked the beginning of the feud that would ultimately lead to Wilde’s downfall. 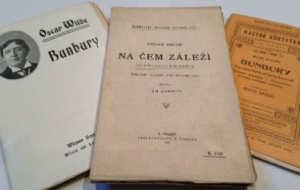 The Importance of Being Earnest was not published until 1899 when Wilde himself was living in France following his release from prison.  Since then, countless editions have been published, many of which reside in Univ’s Alport and Robert Ross Memorial collections.  These include a first edition, limited to 100 signed copies, in a fine binding designed by Charles Shannon with gilt details on the covers and spine (Fig. 1, Ross d.3), as well as acting editions from the early twentieth century (Fig. 2, Ross e.80).  The play was also quickly published in a variety of languages, and Univ ‘s collections hold editions in German, Hungarian, and Czech often published under the title Bunbury (Fig. 3, Ross e.330, Ross e.401, Ross f.112).  Univ is also lucky to own a limited edition produced in 1910 to celebrate George Alexander’s twentieth year as manager of the St. James’ Theatre (Fig. 4, *YHV/WIL). 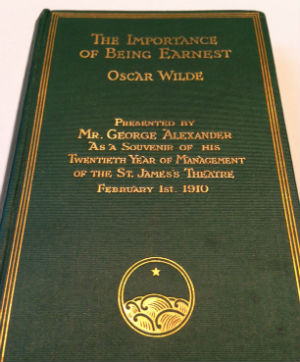 This month’s Treasure is one of our “ugly ducklings”…