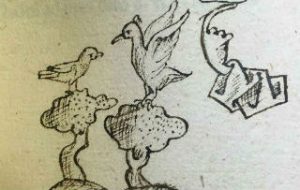 This Treasure is the second to feature one of Univ’s 15th century printed books, also known as incunables. The text is Ambrosius Speira’s Quadragesimale de floribus sapientiae (or “Lenten flowers of wisdom”). Spiera (ca. 1413-1454/5) was a Servite theologian whose sermons were so popular with students of theology that they were published in four editions from 1476 to 1500, both north and south of the Alps. In the 15th century, at the very birth of printing with movable type, this would have amounted to a best-seller. This, the first edition of the text, was printed in Venice by the German printer Wendelin of Speyer in 1476.

This particular copy of the text is notable for its kooky marginalia. Throughout the text in a contemporary, probably French, hand are numerous drawings, manicules, and notes on the text. Manicules, otherwise known as pointing hands, are pictorial devices to mark interesting or noteworthy parts of a text. The term manicule comes from the Latin word maniculum, or “little hand”. Manicules were originally used in the Domesday Book in 1086, but continued through the Renaissance and beyond.

As well as the manicules, this volume includes many lovely ink drawings of human figures (including monks, the Virgin, and demons), animals (doves and donkeys), boats, and churches. There are also many pages decorated with musical notation as well as some unidentifiable doodles.

Unfortunately no records survive to tell us how the book ended up in Univ’s collections and, other than the marginalia, there are no marks of former owners within the book. We know that it was in our collection by the early part of the 18th century (probably by 1718), as it appears in one of the manuscript catalogues of books held in the Library. 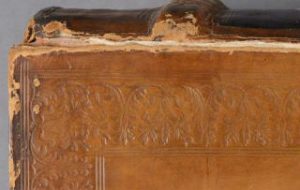 In May 2016 the volume underwent some much needed conservation work. Victoria Stevens of the Oxford Conservation Consortium took on the project, spending 43 hours mending tears in the paper, removing the damaged spine, re-sewing the sections, and re-backing with new leather. The before and after image shows how much of a difference conservation makes to our collections. This volume can now be used by researchers without fear of causing further damage. 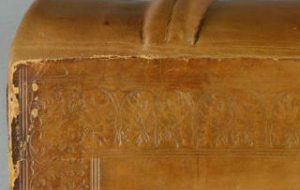 Coates, A. (2005). A catalogue of books printed in the fifteenth century now in the Bodleian Library, Oxford. Oxford: Oxford University Press.