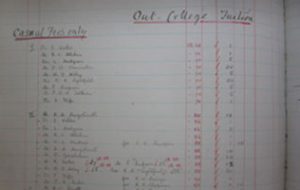 This month’s Treasure is one of our “ugly ducklings”, because it shows how an initially unglamorous source – in this case, an account book from 1920 – can yield up new information about one of Britain’s most famous creative writers of the 20th century, namely, J R R Tolkien, the inventor of Middle-Earth and author of The Lord of the Rings.

At the end of the First World War, Tolkien came back to Oxford, where he had been a student, and joined the staff of the Oxford English Dictionary. During this time, he worked on words beginning with “w”, including waggle, waistcoat, walrus and wander. All of them derived from Germanic languages, so that the Dictionary could benefit from Tolkien’s special expertise in this field. The OUP archives show that Tolkien worked for the Press until June 1920.

However, whilst Tolkien was working for the OED, he found time to teach undergraduates Anglo-Saxon. According to Humphrey Carpenter’s standard biography, he first taught students from the women’s Colleges. Since by this stage he was married, Tolkien could teach women students at his home without the need for a chaperone to attend.

Tolkien’s reputation grew, and he acquired more pupils. He was in a good position to do so: not only did Oxford have an unusually large undergraduate population in 1919–20, thanks to the many men returning from the war, but there were very few academics qualified to teach English, which was still a fairly new subject at Oxford. Many Colleges did not have English Fellows – indeed Univ did not have one until Peter Bayley was appointed in 1947.

In October 1920, Tolkien moved to the University of Leeds, where he was appointed Reader in English Languages. In 1922 he was joined there by another English scholar, Eric Valentine Gordon, who had come up to Univ as a Rhodes Scholar in 1915, gone off to fight, and then returned to complete his degree. Tolkien and Gordon became lifelong friends, collaborating on an edition of Sir Gawain and the Green Knight, which is still the standard student edition, and Gordon’s early death in 1938 was a great blow to Tolkien.

It has long been claimed in Tolkien literature that, when Gordon came back from the war, he was taught by Tolkien at Univ. However, only this month someone contacted me for the first time to ask if there was any archival evidence for this claim.

There is. For much of the 19th and 20th centuries we have a succession of so-called “Bursar’s Books”. These are annual volumes of accounts, which record many aspects of domestic income and expenditure, be it how much salary Fellows received, or exactly which College member occupied which room. These books also include records of payments made to tutors brought in from outside the College to teach our students. So when I consulted the Bursar’s Book for 1920 (ref. UC:BU3/F3/93), there appeared this entry for “Out-College Tuition” on page 257 showing Tolkien being paid £5 for English tuition in both Hilary and Trinity Terms – and in the Trinity Term it is explicitly stated that he was teaching E. V. Gordon.

So we have at least one new glimpse into how Tolkien was building up his teaching “practice” in 1920, and proof that Univ was indeed one of the Colleges who were happy to benefit from a promising young academic eager to earn some money. It would be interesting to know whether other College archives can pick up similar traces of Tolkien’s teaching activities in 1920.

This month’s Treasure is a modest volume containing…

John Browne, the subject of this month’s Treasure, is one…