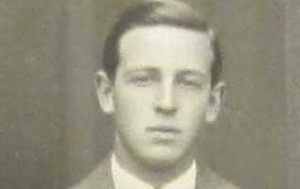 22 November 2013 marks the 50th anniversary of the death of one of Univ.’s most famous 20th century alumni, C S Lewis, author of the Narnia books and many works of theology, including The Screwtape Letters.

The Lewis scholar Professor Joel Heck has created a detailed chronology of Lewis’s life, which will have more information about Lewis’s Univ years. You can read it at joelheck.com

To commemorate Lewis’s links with this College, we have put up images of some of the documents which relate to his time here.

Lewis came up to Univ in 1917, at the height of the First World War (see Fig. I), but left shortly afterwards to join up. He was badly wounded in France, but returned to Oxford in 1919 to resume his studies. He proved a brilliant student: in 1922, he got a First in Classics, and then decided to stay on for another year and do a second degree, this time in English. In one year, he worked through a syllabus which was expected to take students two years, and then in 1923 got another First. 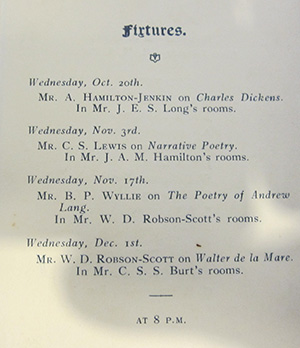 While at Univ, Lewis was a keen member of the Martlets. In Lewis’s time the Martlets was a literary society, which held several meetings each term to discuss particular authors or books. 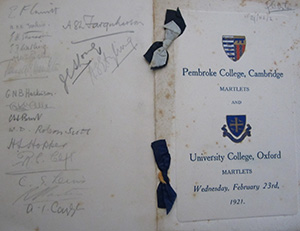 Lewis rose to become President of the Martlets, and regularly attended their meetings and their dinners. 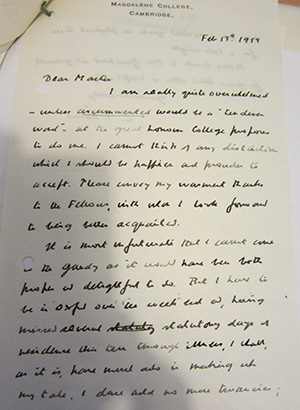 Lewis would have liked to have remained at Univ as a Fellow, but there were no openings for him at the time. Instead in 1925, he was elected a Fellow of Magdalen College, where he would spend the next three decades.

Lewis, however, always kept in close touch with his first College. Until the 1940s, all Univ undergraduates reading English went to Magdalen to be tutored by him, and in 1959 he was delighted to be elected an Honorary Fellow of the College (the opening of his letter of thanks is reproduced at Fig. IV).

This month’s Treasure is one of our “ugly ducklings”…