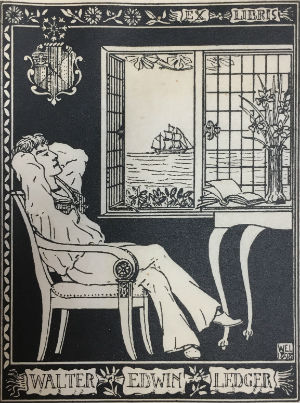 Bookplates were first used in the later part of the 15th century, when Gutenberg’s invention of moveable type made the duplication of text and images a lot simpler than copying by hand. Initially, illustrations used on bookplates were largely heraldic or armorial but by the later 19th century collectors were starting to favour plates with a more pictorial style[i].

The bookplate that Walter Ledger designed for himself in 1898 is an example of this pictorial style, in which the design of the plate tells a story about the owner and his life. We don’t know a great deal about Ledger’s life, but a lot of what we do know can be seen in his choice of bookplate design.

It shows a young man, dressed in a sailor suit, gazing out of a window through which can be seen a sailing boat. On the window sill is an open book and a vase of daffodils. We know that Ledger was a keen sailor who dressed as a Blue Jacket for the last 20 years of his life, complete with a cap embroidered with the name of his boat, the Blue Bird. He was also very fond of gardening; the only known photograph of him was taken in his “beloved” garden in Wimbledon. The book on the window sill is an indication of Ledger as an avid book collector and amateur book-binder.

The second of the bookplates identifies the book as part of the Robert Ross Memorial Collection. Walter Ledger began collecting the printed works of Oscar Wilde in the late 1890s. Although he never met Oscar Wilde, Ledger held Robert Ross, Wilde’s friend and literary executor, in high regard. As well as the many examples of the bookplate, the original artwork is also part of the collection.

The artwork has been framed very simply in black, with the following inscription in ink: “To Walter Ledger from Emery Walker, 7 June 1928.”

The image, below, shows the reverse of the frame.

Sir Emery Walker (1851-1933) was an engraver, printer, and typographer who was probably most famous for setting up the Doves Press with Thomas Cobden-Sanderson. His typography and book design is often cited as the major influence in the improvements in British book production during the 20th century[ii].

So far, we cannot make a connection between Emery Walker and our collector, Walter Ledger, but the link between Walker and Oscar Wilde is better documented.

In November 1888 Emery Walker gave a lecture as part of a series organised by the newly formed Arts and Crafts Exhibition Society. The Society aimed to demolish the perceived difference between the Fine arts and Decorative art[iii]. The subject of the lecture was letterpress printing and illustration, and in the audience were two familiar faces: Oscar Wilde and William Morris. By the following day, The Pall Mall Gazette printed Wilde’s glowing review of the lecture in which he noted that Emery Walker had a “keen artistic instinct that comes out of actually working in the art of which he spoke”[iv].

From the late 1880s Oscar Wilde shared his opinions about book design and typography in many letters to the publishers of his books as well as his illustrators and binding designers, attesting to a keen interest in the aesthetics of book production[v]. Given Wilde’s admiration of Emery Walker, he seems a fitting choice for the creation of the bookplate for Ledger’s collection.

The other notable attendee of Walker’s 1888 lecture was William Morris. By this point in his career, Morris was known as a socialist activist, a poet and as a designer of textiles and wallpapers[vi]. It was, according to his daughter, May, after hearing Emery Walker’s lecture that he was inspired to set up the Kelmscott Press in 1891[vii]. The Press, although it only operated for seven years, printed 66 volumes, now highly collectible, on a hand-operated press using hand-made paper.

It has only been four years since the Robert Ross Memorial Collection was returned to College from the Bodleian Library. In that time the Library team has been working to gain a clearer understanding of the Collection which, as noted in the College Record of 1930/31, ‘forms a most extensive and valuable commentary on this period of literary and artistic history, which saw the flowering of the aesthetic movement, and had a wide reaction abroad’[viii].