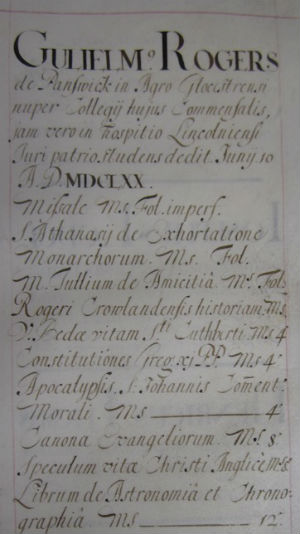 This month’s Treasure is another of Univ’s medieval manuscripts. Produced around 1300, it is what is known as an Apocalypse manuscript.

Bursting with beautiful illuminations, Apocalypse manuscripts depict the last book of the bible; the Book of Revelation (or “apocalypse” in Greek). Produced in French and Latin and popular in the 13th century, they represent the beginning of a tradition of Apocalypse illustration that continued for centuries; from the block-books of the early 15th century, to the intricate woodcuts of later 15th and 16th century printed texts.

Univ’s Apocalypse manuscript was donated to the College in 1670 by Old Member, William Rogers of Painswick (matriculated 1663). One of several books donated by Rogers at this time, it is recorded in the Library Benefactors’ Bookand listed alongside another of Univ’s manuscripts, Bede’s Life of Cuthbert (see Figure 1: ‘Apocalypsis’ and ‘V. Bedae Vitam’). You can learn more about the Library Benefactors’ Book and Bede’s Life of Cuthbert in our previous Treasures. 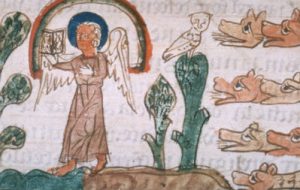 Fig.2 The story of Revelation 10

In its medieval white leather binding, Univ’s Apocalypse contains a series of coloured drawings, each depicting dramatic scenes from the Book of Revelation. Some of the angels and beasts described are shown here in figures 2 to 5. Figure 2 shows the story of Revelation 10 in which John is instructed to eat the book held by the angel. The angel stands alongside seven thunders with a rainbow above him and with one foot on the land and one foot on the sea. 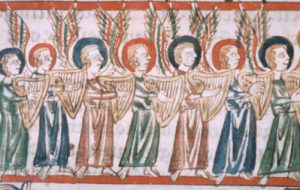 In Figure 3, seven angels stand with their harps (Revelation 15: 1-4) whilst in Figure 4, three unclean spirits rise like frogs from the mouth of a dragon (Revelation 16: 13-14). Finally, in Figure 5, John sees the New Jerusalem coming down from heaven by God (Revelation 20).

A digitised version of MS 100 is available to view on Digital Bodleian. 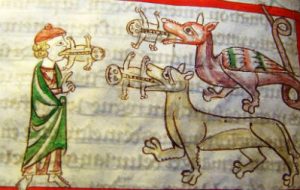 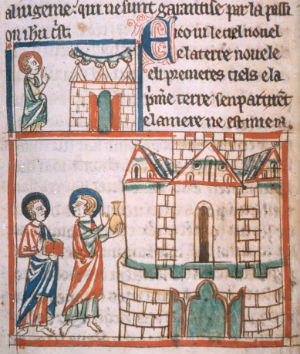