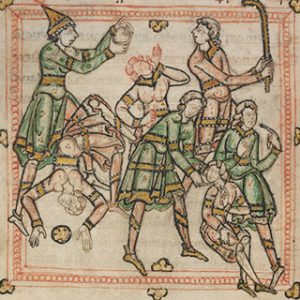 Bede’s Life of Cuthbert tells the story of Cuthbert (c.635-687), an early Christian monk who became Prior and Bishop of Lindisfarne.
Cuthbert lived at a time of great religious change. Following the spread of Christianity to England in c600, Roman and Irish (or Insular) traditions emerged with different practices that often placed them in disagreement. The most divisive issue concerned the date upon which Easter was celebrated with each tradition regularly observing different days. In 664 the Synod of Whitby resolved the dispute for Northumbria in favour of the Roman church. 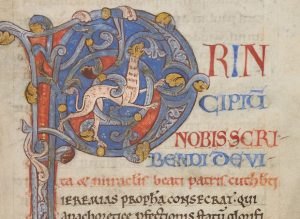 Despite having been educated in the Irish tradition, Cuthbert accepted this decision and led a quiet and contemplative life on Farne, preaching and working miracles. Following his death, the cult of Saint Cuthbert developed with reports of miracles caused by his body and relics. During this time, four accounts of his life were also written including three by the Venerable Bede (673/4-735), a monk and historian whose notable works include the Ecclesiastical History of the English People. 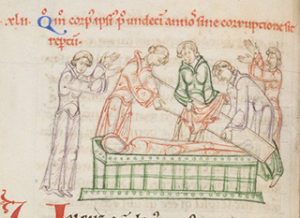 Whilst Bede wrote a Life of Cuthbert in both verse and prose, Univ’s MS 165 contains an example of the prose work. It was probably produced in the first half of the twelfth century and is divided into 46 chronological chapters beginning with Cuthbert as a child and ending with his death and the miracles that followed.

The manuscript contains several painted initials (see Figure II, fol. 6r) and each chapter is illustrated by a series of miniatures. In Figure I (fol. 5v), you can see the prophesy of Cuthbert’s bishopric which was given by a boy with whom Cuthbert had been playing as a child. In Figure III (fol. 60v), you can see the moment at which Cuthbert’s body was discovered uncorrupted nine years after his death.

This intriguing volume was presented to the Library by…