Funeral procession of Elizabeth I 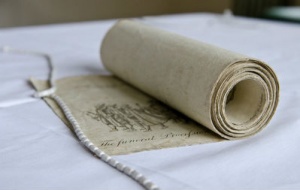 On 28th April 1603, the death of Queen Elizabeth I was marked by a great funeral procession from Whitehall to Westminster Abbey.  Two drawings of the procession exist, providing an interesting account of the event.  Although both originals are now housed in the British Library (Add. MS 5408 & Add. MS. 35324), Univ owns a fine eighteenth century reproduction of the drawing attributed to William Camden (1551-1623).

A noted historian, Camden is best known for two works; the Britannia and the History of Elizabeth.  Begun in 1608, the History took over seven years to complete, due in part to Camden’s service as Clarenceux King at Arms, to which he was appointed in 1597.  Highly successful upon publication, the Historyremains an influential and respected work to this day. 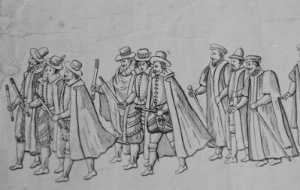 Camden’s pen and ink drawing of Elizabeth’s funeral procession provides a detailed description of the people present and a unique insight into Elizabethan society.  Amongst the mourners are commoners and noblemen alike, each named and, in some cases, numbered.  At the end of the procession, Elizabeth’s effigy is carried beneath a canopy on a chariot drawn by four horses and flanked by six barons carrying banderoles (Woodward, 1997, p. 87).

The original scroll was found by an Old Member of Univ, John Eardley Wilmot (bap. 1749 – d. 1815, later John Eardley Eardley-Wilmot), amongst the papers of his wife’s grandfather, Peter Sainthill.  Matriculating from Univ in 1766, Wilmot graduated in 1769, before being elected a fellow of All Soul’s College and becoming a prominent politician and writer.  Upon finding the scroll, he donated it to the British Museum, presenting a facsimile to his old College in 1791. 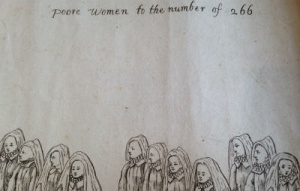 This facsimile was made up of a series of fine engravings published in 1791 by the Society of Antiquaries, of which Wilmot was a fellow.  Engraved by James Basire (bap. 1730 – d. 1802) and originally printed in fourteen sections on seven folio sized plates, Camden’s drawing was reproduced in the Vetusta Monumenta; a series published irregularly between 1747 and 1906 to document ancient monuments and artefacts.  Accompanying the plates was a passage of text taken from Richard Niccols’ Expicedium; a funeral oration and detailed description of those in attendance.  Wilmot donated this text along with the facsimile of the scroll.

Although Univ’s scroll is incomplete, it shows many of the men, women, and children who walked ahead of Elizabeth I’s effigy. We see knight marshals clearing the way, 266 poor women (above), and the Banner of Cornwall carried by Lord Herbert (below), son and heir to the Earl of Worcester. 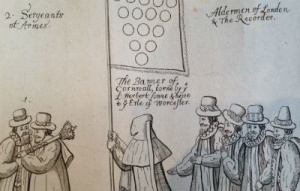 The Banner of Cornwall