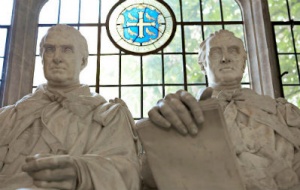 Visitors to Univ College Library never fail to notice the monumental figures of Lords Eldon and Stowell presiding over the Poynton Reading Room (see Fig.1) but the story of how they came to be here is always a surprise.

John Scott entered University College in 1766 upon the suggestion of his brother William, then a fellow.  After their time at Univ, both brothers entered Middle Temple and became highly distinguished in their fields; William becoming judge of the High Court of Admiralty in 1798 and Baron Stowell of Stowell Park in 1821, and John becoming Lord Eldon of Eldon in 1792 and Lord Chief Justice in 1799.  Given their successes, it seems fitting then that the College house their memorial but the statues came to the college in rather unusual circumstances. 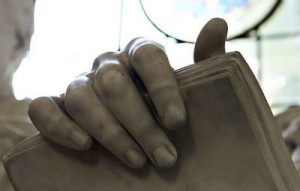 Commissioned in 1840 by the Second Lord Eldon, John Scott’s grandson and heir, the creation and accommodation of the statues was fraught with complication.  Eldon’s first sculptor of choice, the notable Sir Francis Chantrey, could do no more than produce some initial sketches before he died in 1841.  The commission then passed to Musgrave Lewthwaite Watson who produced a small model and a full sized model in clay, before beginning in earnest on the figures themselves.  Unfortunately, whilst carving Baron Stowell who sits holding a book on the right (see Fig.2), Watson also died and the commission passed again to Watson’s assistant, George Nelson.  Finally completed in 1850, the statues were displayed at the Great Exhibition of 1851where the exhibition catalogue describes them as “a colossal work in marble” weighing twenty tons (Official descriptive and illustrative catalogue…, 1851, p. 848). 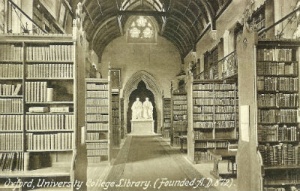 By now, the statues had taken over ten years and three different sculptors to complete but their journey was far from over.  Originally intended for the Second Lord Eldon’s own Oxford College, New College, there was unfortunately no space for them by 1844.  With their obvious connection to the College, Eldon therefore offered them to Univ.  The exact details of this offer are unclear but, following Eldon’s death in1854, his trustees proposed the financing of a new building to house the statues, possibly settling on a library because it seemed most appropriate in terms of size and usefulness (Darwall-Smith, 2011, pp. 107-108).  In 1858, work began with distinguished architect George Gilbert Scott engaged for the project.  The statues then arrived in 1860 and were placed in the west end of the library (see Fig.3), with the building completed around them by 1861 (Darwall-Smith, 2011, pp. 109). 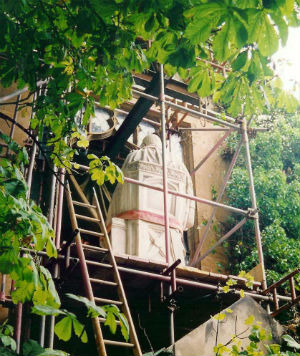 However, their story does not end there.  With the installation of the first floor and the creation of the Poynton Reading Room in 1937, the statues bore witness to great change and were relocated to the foyer at the east end of the library where they offered an imposing welcome to students and visitors.  However, their greatest move was still to come as, in the early 1990s, they were lifted to their current position at the west end of the first floor.  This was no easy feat (see Fig.4) but it is now difficult to imagine them being anywhere else.  Having lived in the library for over 150 years, the Lords Eldon and Stowell are now a fond memory for Univ students past and present.

Official descriptive and illustrative catalogue of the great exhibition of the works of industry of all nations, 1851. Vol. 2. (1851). London: Spicer Brothers.

For this month’s Treasure, we aim to answer…