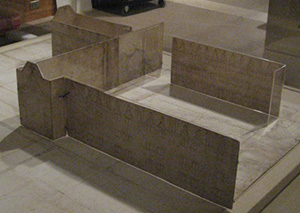 Model seen from the north-east

By the 1630s, the Fellows of Univ had felt for some time that they needed to build a larger quadrangle, to cope with the numbers of undergraduates now coming into the College.

The question was how to find the money for this project. Then in 1631 Sir Simon Bennet, one of our Old Members, died leaving the College a large estate in Northamptonshire. The income from the estate would support more Fellows and Scholars, but there was also a great deal of timber on the land, which could be sold off to pay for the construction of a new quadrangle.

At once the College with its new Master Thomas Walker moved into action. We know of at least two designs for a quadrangle which the Master and Fellows considered, one very modern, and one more traditional. The traditional design, designed by Richard Mason, who had also worked on Canterbury Quadrangle at St. John’s College, won. 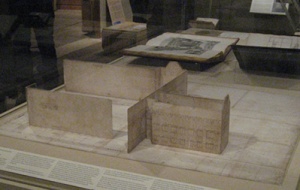 Model seen from the west

In the archives we have many plans relating to this project, showing the way that it evolved with time, but we also possess these substantial portions of an architectural model, made of card. Sir Howard Colvin, the great architectural historian, was in no doubt that this is the oldest model of its kind in Britain, and it is therefore one of Univ’s greatest treasures.

Both the model, and all the plans of the new quadrangle are drawn to the same scale, so that the model can be placed on top of any of the plans, as can be seen in these photographs (taken when the model was exhibited at the Yale Center for British Art in 2010.) We must therefore imagine the Master and Fellows of the 1630s crowding around this model and the plans, heatedly discussing its designs. 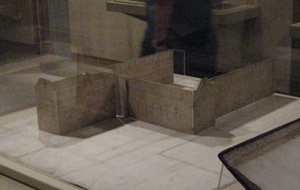 Model seen from the south

Work started on the new quadrangle in 1634, and was finally completed in 1676. More information about the complex history of its construction can be found in the section on College buildings, and also in Robin Darwall-Smith, A History of University College, Oxford (Oxford, 2008), Chapters 9–10.