July 2016 marked the 100th anniversary of the terrible first month of the Battle of the Somme, and we take this opportunity to reflect on how the First World War was reflected within the College, and especially by Reginald Macan, who was our Master at the time.

Our main source is the College’s great series of Admissions Registers. Ever since 1674, every new member of Univ has had to write an entry in one of these Registers, giving details of their parentage, home and age. The only difference is that, in the 1950s, we started recording entries in English rather than Latin.

In the early 20th century, it became the custom to leave a record (almost always in red ink) when an Old Member died. Every death which occurred during the First World War was entered in by Master Macan himself in his distinctive hand. As we see these entries, we should remember that Macan’s only surviving son, Basil, had been killed in 1915.

Since the original entries had been written in Latin, Macan gave details of deaths in Latin too, almost always using the same form of words, namely “ob. c. Teuton. milit.”. This is short for “obiit contra Teutonicos militans”, or “he died fighting against the Germans”.

During the first month of the Somme, sixteen members of Univ, or young men who had been offered places here, were killed. We show the entries in the Admissions Register for each of those men who had actually attended the College.

William Kingsley Callard (accepted for matriculation in 1915), aged 19. He was serving with the 5th Battalion Leicestershire Regiment.

Charles Fouracres Greenlees (matriculated 1914), aged 23. He was serving with the 9th Battalion The Queen’s (Royal West Surrey Regiment), and was his parents’ only son.

Geoffrey Harrison (accepted for matriculation in 1915), aged 20. He was serving with the 12th Company Machine Gun Corps.

Philip Squarey Houghton (matriculated 1912), aged 22. He read Natural Science at Univ, and was serving with the 1st/9th Battalion London Regiment (Queen Victoria Rifles) Territorial Army. Like Greenlees, he was his parents’ only son.

Ernest Kerrison Jones (matriculated 1911), aged 24. He read Maths at Univ, and was serving with the 8th Battalion Royal Welch Fusiliers.

Myles Lewis Wigan Matthews (matriculated 1911), aged 23. He read Law at Univ, but had also been JCR President in 1913/14, and was a member of the Univ Eight which went Head of the River in 1914 (and who are discussed in an earlier Treasure, Univ and the Great War). He served with the 6th Battalion Queen’s Own (Royal West Kent Regiment). He had been mentioned in dispatches in 1916.

Stuart Alexander White (matriculated 1905), aged 29. He read Maths and Physics at Univ, and was serving with the 21st Battalion Northumberland Fusiliers (Tyneside Scottish).

Arthur Murdo Walker Robertson-Walker (matriculated 1900), aged 34. He read Classics at Univ, and was serving with the 8th Battalion Royal Fusiliers (City of London Regiment). Robertson-Walker was the oldest member of Univ to fall during the first month of the Somme.

John William Binfield Russell (accepted for matriculation 1915), aged 19. He was serving with the 9th Battalion The Duke of Wellington’s (West Riding Regiment).

William Robert Benny McJannet (matriculated 1904), aged 30. He read Law at Univ, and was serving with 10th Attached 7th Battalion (the Duke of Albany’s) Seaforth Highlanders. He was his parents’ only son.

Hugh Gwilym Morris (matriculated 1904), aged 31. He read Natural Science at Univ, and was serving with the Royal Army Medical Corps.

By a tragic coincidence, not only were McJannet and Morris killed in battle on the same day, but their names appear together in the Admissions Register.

Douglas Hilton Skinner (matriculated 1911), aged 23. He read Natural Science at Univ, and was serving with the 7th Battalion Royal West Kent’s (the Queen’s Own).

Kenneth Douglas Thomson (matriculated 1906), aged 28. He read Classics at Univ, and was serving with the 10th Battalion Argyll and Sutherland Highlanders (Princess Louise’s).

Lancelot Sulyarde Robert Cary (matriculated 1914), aged 20. He read Law at Univ, and was serving with the 9th Battalion Devonshire Regiment. He was his parents’ only son.

James Elliot Sparks (matriculated 1913), aged 21. He read Classics at Univ, and was serving with the 2nd Battalion Royal Fusiliers (City of London Regiment).

At least one member of Univ was killed in almost every month of the First World War, even down to November 1918, but July 1916 was the bloodiest month, and 1 July the bloodiest day.

These entries in the Admissions Registers are somewhat private records, but Reginald Macan also made a more public commemoration of the College’s fallen. Throughout the war, he used the backs of printed copies of the College Grace to write down the names of the dead as news reached him. To judge from the state of these documents, these lists were evidently pinned up somewhere in the College (perhaps inside the Chapel, or on the Chapel door?)

Only four such lists survive today, but two of them cover the first days of the Somme, and are shown below. 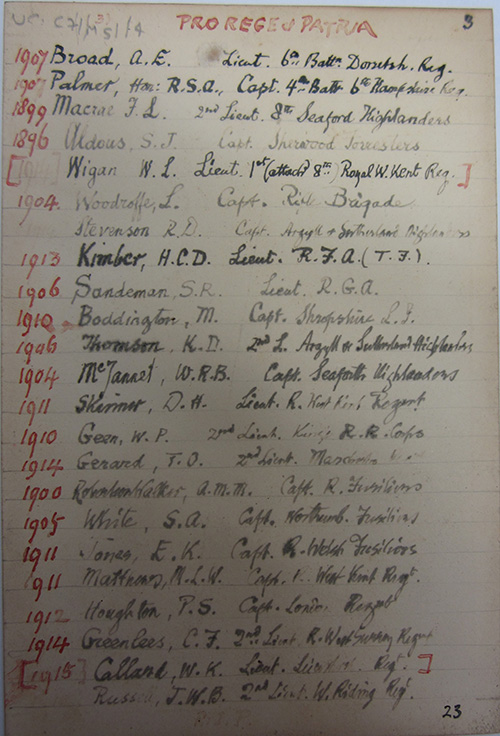 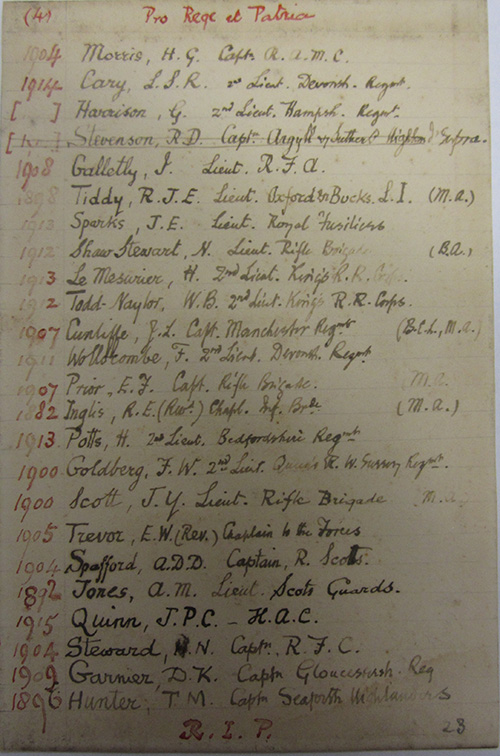 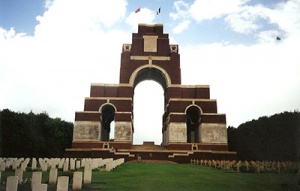 The names are evidently written in the order in which Macan heard about them, as they are not quite chronologically exact. From the very first, however, Macan made sure to include the names of men who had been offered places at Univ, but who had been killed before they were able to take them up. All these names, including those of people offered places, were then inscribed the College’s First World War memorial which was erected after the war.

As for our sixteen Somme dead from July 1916, just six of them (Callard, Greenlees, Harrison, Morris, Skinner, and Thomson) are buried in military cemeteries in France. The remaining ten (Houghton, Jones, Matthews, White, Robertson-Walker, Russell, Gerard, McJannet, Cary, and Sparks) have no known grave, and are therefore commemorated only on the Thiepval Memorial.