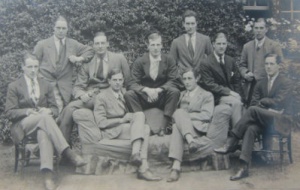 On 11 November 2014, as a commemoration of the 100th anniversary of the outbreak of the First World War, the Archivist curated a special exhibition about Univ and the Great War. It could only be up for one day, and so as a rather unusual Treasure for this month, we will give you a virtual equivalent of that exhibition. You can download from here a pdf of the whole exhibition catalogue, but for the main part of this page, we include a selection some of the items put on display that day. 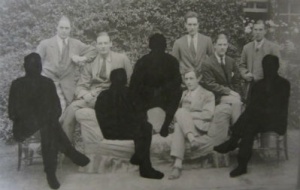 First of all, above we show you a group photograph of the Shakespeare Club from 1914. Four of the ten people there were killed during the war, and the photo to the right is a diagram showing which ones were killed. From left to right they were: 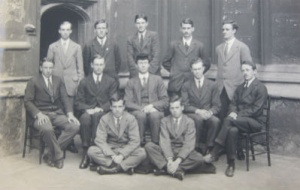 The next image (to the left) is of all the undergraduates who were at Univ in 1916. This shows how much the College had shrunk during the war. Some of these men had been exempted from fighting, and others belong to neutral nations, but there was one rather unusual student here. Sitting on the right-hand end of the middle row, sporting a moustache, is Eric Dodds (1912), a brilliant classicist and future Regius Professor of Greek at Oxford. Dodds was a passionate Irish nationalist, and refused to participate in a war which he believed had nothing to do with him. 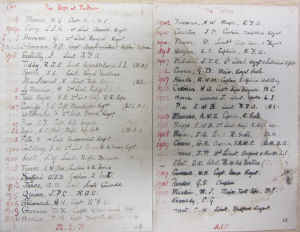 During the war, our Master, Reginald Macan, maintained a list of members of the College as news of their deaths had reached Oxford, writing them on the backs of copies of the College Grace. Two such lists are preserved, which cover the periods July–December 1916 and March–October 1918. Matriculation years are given in red alongside each person’s name, but already the names of men accepted for entrance who had died before coming up are given.  William Todd-Naylor, one of the Univ First Eight which went Head of the River in 1914, appears almost half-way down the earlier list. His album was used as our May, 2014 Treasure, and you can find out there more about what happened to members of that crew during the war.

After the war, current and former members of Oxford were asked to fill in forms about their war service, which were used in compiling the Oxford University Roll of Service, which gave details of every member of Oxford who had served in the war. Many of the the forms compiled for Univ still survive, and here is one such form, filled in by Clement Attlee, who had come up to Univ in 1901, and would go on to become Prime Minister in 1945.

In 1921, a War Memorial was dedicated in the Chapel at Univ. It bears 173 names, but the researches of James “Dusty” Miller, our former Head Porter, into our war dead, suggest that 178 Univ men fell. It has been calculated that over 20% of Univ members who joined up were killed in the war, when the loss rate throughout the country was 10%. Within Oxford, only Corpus Christi College lost a higher proportion of its members.

One name, however, was omitted from the Memorial, This was Rolf von Seldeneck, a German student, who came up in 1911. His entry in the Admissions Register is shown below. While at Univ von Seldeneck, along with several other members of the College, both British and German, joined the Hanover Club, a university society founded to foster Anglo-German relations at Oxford. Von Seldeneck was killed fighting the Russians in Courland (now part of Latvia) in January 1917. After the war, understandably, wounds still ran deep, and almost no College in Oxford or Cambridge included any Germans on their war memorials. Thus von Seldeneck was omitted from our memorial. He is still missing to this day, although at a special service held in the Chapel on 11 November, when all the names of our war dead were read out, his name was included then.