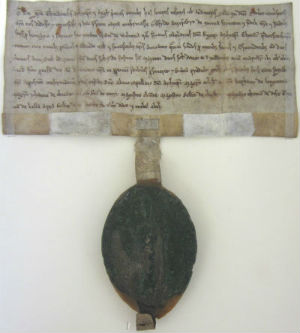 For this month’s Treasure, we aim to answer a question which some regular viewers of this page might well have asked: what is the oldest document held in Univ’s Archives?

Even if further research proves that we do, indeed, have an earlier document, it is certainly a fascinating one.

In some ways, this is a simple enough example of an early medieval title deed. It records a grant made by Geoffrey, Archbishop of York, to his servant Geoffrey Goldsmith (here identified under the Latin equivalent of his name, Aurifaber) of Oxford, of all the land of Wilton which Hervey, the Chamberlain of Master Roger, Archbishop of York (Geoffrey’s predecessor) held, in return for an annual rent of 4 shillings. 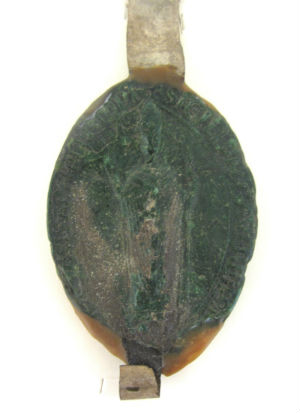 Hanging from the bottom of this document is a splendid seal of green wax, which is that of the Archbishop himself. It has images on both sides. The front of the seal shows an archbishop and has the inscription “Sigillum Gaufridi Dei Gratia Eboracensis Archiepiscopi” (“the seal of Geoffrey by the Grace of God Archbishop of York”).

The image on the back of the seal (see below) shows what has been identified as a warrior or a man holding a stylus and wax tablet, and has the inscription “Sigillum Galfridi Henrici Regis Anglorum Filii” (“the seal of Geoffrey son of Henry King of the English”):

Archbishop Geoffrey is an interesting character in his own right. Born in about 1151, he was an illegitimate son of the future Henry II of England. According to the historian Walter Map, Geoffrey’s mother was called Ykenai, but other early sources claimed that his mother was Rosamund Clifford, “Fair Rosamund”, the most famous of Henry’s mistresses. Although, through his illegitimacy, Geoffrey could never succeed his father as king, yet Henry was happy to advance his career in other ways. Geoffrey took holy orders, and by his mid-twenties had become Bishop of Lincoln. In 1189 he laid claim to the archbishopric of York, but was only installed in post in 1191. He remained Archbishop until his death in 1212. 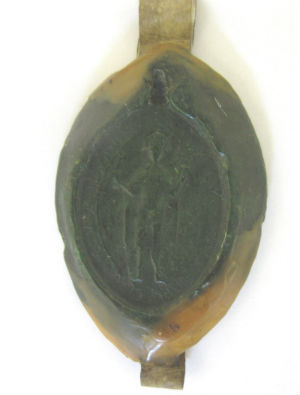 For all that he devoted his life to the church, Geoffrey led a turbulent life. In the 1170s and 1180s, Geoffrey remained loyal to Henry during his father’s struggles with his legitimate children, even leading some of his armies, and he was at Henry’s side when he died at Chinon in 1189. As Archbishop, he had a turbulent tenure, regularly falling out both with clerics in his diocese and his half-brothers Richard I and John. In 1208, Geoffrey felt sufficiently unsafe that he fled to France and died there in exile.

This deed is undated, but it must have been created at some point during Geoffrey’s time at York. We can, however, date it a little more precisely than that, because Stephen de Langeton, one of the witnesses, became Archbishop of Canterbury in 1206 (and would go on to play a leading role in the creation of Magna Carta in 1215). The deed must therefore date from c.1191–1206.

There remains one mystery: where was “Wilton”? Archbishops of York once owned a palace at Bishop Wilton, Yorkshire, but the Goldsmiths are never linked with land there. On the other hand, it is not possible to link “Wilton” with land in or near Oxford itself.

People may well ask why such a deed has ended up in the archives of a College which was only founded later on in the 13th century. The reason is that until the 1920s and the introduction of land registration, the only way that someone could prove their ownership of their property was to have as many title deeds as possible stretching back in time to show the history of the property. In 1361 the College acquired several properties in and around Oxford which had been owned by the Goldsmith family, and so we presume that this deed came to us with all the other deeds which were transferred by the vendor at this time. It has therefore lived in the College for over 650 years.