In 1893, the Shelley Memorial was inaugurated at Univ. The Memorial, the work of Edward Onslow Ford, was given by Jane Shelley, the poet’s daughter-in-law, who also paid for a building to house it, designed by Basil Champneys. Even at the time, Ford’s sculpture, with its hints of androgyny and necrophilia (Fig. 1),  must have seemed strong stuff. Newspapers report that our Master, James Franck Bright, thanked Lady Shelley warmly for her generosity, but said very little about the statue itself, merely observing that those present “could all of them see it was a thing which any giver might be proud to give, and any receiver might be proud to receive”. 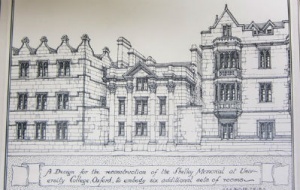 For many years, the Shelley Memorial was generally not esteemed, and during the early twentieth century there were three plans to move Shelley somewhere else. This Treasure of the Month discusses these interesting might-have-beens in Univ’s architectural history.

The first proposal came in 1926, when the architect Arthur Butler (1888–1965) was commissioned to produce a new enclosure for Shelley, to include some extra accommodation. Butler had strong views about the style of his design. In a letter to the then Master, Sir Michael Sadler, he advised against creating an extension to the Main Quadrangle or the New Building: “no horizontal lines in the two facades correspond, nor do their scales exactly, and, as you know, one is fifteenth century Gothic done in the eighteenth century [recte seventeenth] and the other is late fourteenth century Gothic done in the nineteenth century.” 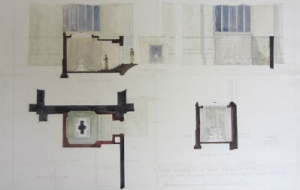 He therefore offered something in what he called “seventeenth century English baroque”. This (Fig. 2, above) was a building with four floors, to include six sets of rooms, and an enclosure for the statue on the garden side, lit from above. The result is indeed a homage to the baroque, with its Corinthian pilasters and little pediment.

At least Butler had no doubts about the aesthetic value of Shelley, and was always trying to create something worthy of it. In a letter of 1 July 1933, he wrote that “the actual monument is a XIXth century work of the best quality.” 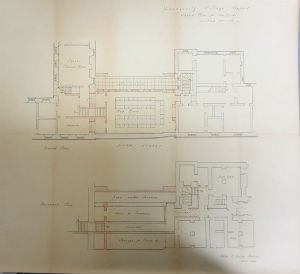 This plan, however, seems not to have been discussed any further. Instead in the early 1930s the enclosure around the Memorial was rebuilt, with the metal grille around it transformed to make the statue easier to see.

Nevertheless, some restlessness about Shelley remained, and in January 1938, when Sir William Beveridge was Master, the College Minutes report that Butler be invited “to offer suggestions of possible improvements” to the Memorial. In January 1939, Butler came up with a new plan (Fig. 3, above). Now Shelley would be moved to a sunken enclosure to the east end of the Chapel, accessible from Radcliffe Quadrangle. This scheme, however, seems never to have been discussed any further; in any event, the outbreak of the Second World War would have turned people’s minds to other matters. 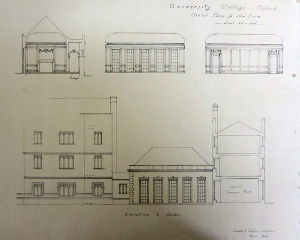 After the War, however, came the most determined attempt to move Shelley, when Univ wished to commemorate those members killed in 1939–45. There would be a new memorial in the Chapel, of course, but there was also a suggestion that a new dining room be built in the College, suitable for senior and junior members to use, and that the site of the Shelley Memorial would be the ideal spot.

The commission was given to the architect Walter Godfrey (1881–1961), and between 1947 and 1950 he came up with various ideas. The basic plan (Fig. 4) was to have a dining room up against the High Street, with a terrace behind looking onto the Fellows’ Garden. An underground passage beneath the room would grant access to the New Building and 90 High Street. 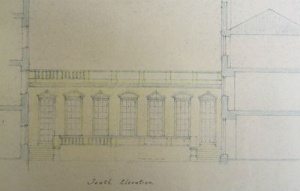 The plan underwent various changes. Fig. 5 shows a room on ground level, and hints at some of the furnishings which the room might have, but Fig. 6 (right) shows suggests a rather grander terrace, with steps to and from the Fellows’ Garden. And as for Shelley himself, he would live in an enclosure in the wall which separates Radcliffe Quadrangle from the Master’s Garden (Fig. 7, below).

Discussions for this project progressed to the point that the University College Record of 1948/9 explicitly mentioned the plan “to build a room on the site of the Shelley Memorial which will add very greatly to the amenities of the College” (p. 21). 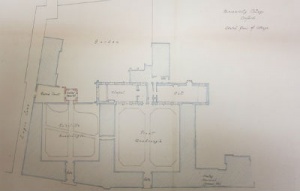 The scheme, however, aroused controversy. The diarist James Lees-Milne in his entry for for 10 December 1948 called the proposed move “a monstrous proposal”, and the Keats and Shelley Society were also unhappy. Even the then Master, John Wild, was anxious that the privacy of his garden would be compromised by having Shelley in the middle of his garden wall.

Gradually, then, this proposal was allowed to rest, and it was eventually replaced by another scheme: this time, the new room would occupy the space then taken up by four sets of rooms on the Kitchen Staircase. This idea proved successful, and thus what we know today as the Alington Room was created.

Meanwhile, Shelley was left safe in his enclosure, where he still remains – and, as Arthur Butler hoped, a later age has come to appreciate Ford’s work as one of the masterpieces of late Victorian sculpture.

The letters and newspaper cuttings quoted in this article are all taken from the papers relating to the Shelley Memorial kept in the College’s archives (ref. UC:FA11).
See too Robin Darwall-Smith, ‘The Shelley Memorial; or the Monument Nobody wanted’, UCR, Vol. XII no. 4 (2000), pp. 74–87.