2016 has been a year of centenaries in relation to the Western Front of the First World War, especially the Battle of the Somme, but for December this year we remember the centenary of a remarkable event over in Eastern Europe, and its unexpected links with this College.

This event was the assassination on 30 December 1916 (17 December according to the old calendar) of Gregory Rasputin, the holy man who had become a favourite of Tsar Nicholas II and the Tsarina Alexandra because of their belief in his healing powers over their haemophiliac son Alexei, and had therefore become highly unpopular on account of his supposed influence over them. One of the chief conspirators in the plot to kill him was Prince Felix Yusupov, who had come up to Univ in 1909, and who is undoubtedly one of the most exotic of our Old Members.

To mark the centenary of Yusupov’s dramatic intervention into world history, we show here some of the documents in our archives which record his time in Oxford.

Felix Felixovich Yusupov (1887-1967) came from one of the wealthiest families among the Russian aristocracy, and his arrival at Oxford is rather unexpected. The reason seems to be that his family disapproved of his wild behaviour in St. Petersberg, and thought that a spell at Oxford might settle him down. It did not always work that way: Yusupov still lived very well in Oxford, and indulged in unexpected quirks: our philosophy Fellow Eric Carritt, when invited to lunch in Yusupov’s lodgings, was surprised to meet a bear cub there. Our batells records also show that he spent more than just about any other student at the College. Nevertheless, in spite of the coldness of his rooms in winter, he seems to have enjoyed his time here.

The first item relating to Yusupov is his entry in our Admissions Register, when he chose to sign under one of his titles, namely as “Count Elston”.

When Yusupov first came up to Univ, the Tutorial Lists for 1909/10 suggest that he studied Forestry and English, as can been seen here. In his last two years, he is recorded as only having been reading English. The story that he studied fine arts at Oxford receives no support from our official records. 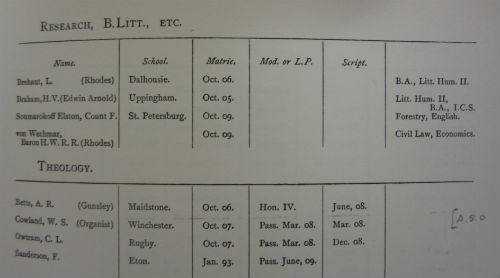 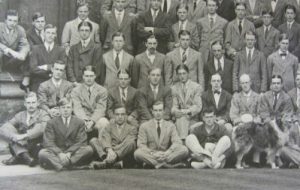 Yusupov involved himself in College life to a degree. In 1911, he took part in the main College group photo that summer, and can be seen sitting cross-legged on the front row, fourth from the left, distinguished by his elegant suit.

He also made some good friends in Oxford, including from social classes very different from his own. One of these was Eric Hamilton, who also came up in 1909 and is seen here in the 1911/12 College Hockey team. Hamilton was a clergyman’s son, who would later take holy orders himself, rising to become Dean of Windsor. Hamilton had been singled out by the Bishop of London as an appropriate companion for Yusupov, but in spite of these inauspicious beginnings, they became fast friends, to the point that Hamilton was invited to spend the summer with Yusupov in Russia. Typescript extracts from the diary in which he recounted his adventure are in the College’s archives. 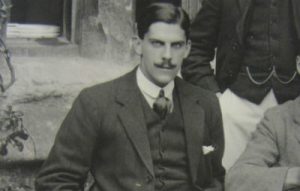 Another College friend was Alfred Earl, a barrister’s son who had come up in 1907, and is seen here, with his rather dashing moustache, in the 1908 College Eight. Earl and Yusupov shared lodgings in George Street in 1910/11, and members of Earl’s family were invited to Russia in 1912.

In 1912 Yusupov left Oxford, never to return. He nevertheless retained happy memories of his Univ years. In the letter below of January 1913 to our then Bursar, A B Poynton, written in Yusupov’s somewhat idiosyncratic English, he asks with regret that his name be taken off the College’s books since he is so busy in Russia. 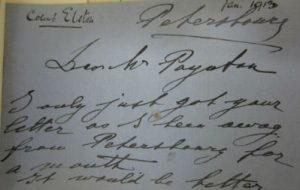 Back in Russia, Yusupov would marry, and become increasingly despairing at what he considered to be Rasputin’s malign influence. In his memoirs, Yusupov set down a terrifying account of how he and his co-conspirators enticed Rasputin into the Yusupov Palace, where they tried variously to kill him with poison, bullets, and finally drowning in the Neva. This account has, however, been disputed in recent years. 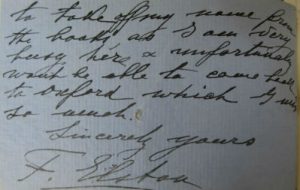 Yusupov had hoped that the murder of Rasputin would save the Russian imperial family (to whom he was linked by his marriage to a niece of Nicholas II) from destruction, but this was too late. Early in 1917, Nicholas was forced to abdicate after the February Revolution. As for Yusupov and his wife, they escaped to western Europe in 1917, and lived in France for the rest of their lives.