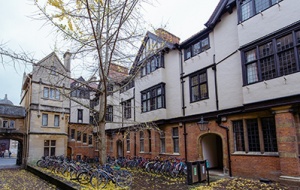 Durham Buildings I and II partly stand on the site of a much older building known as University Hall, which had been used by the College as an annexe since 1868. In 1896, it seems that an extension was created to the south of University Hall, which appears to have been the southernmost end of what we know as Durham Buildings today.  The architect was Henry Wilkinson Moore, (who also designed Kybald House and refurbished our Hall). Just a few years later, however, the College decided to demolish University Hall, and commissioned Moore to replace it with buidlings in the same style as what he had built in 1896. This work took place in 1901–3. The buildings were intended for student occupation.

One of the rooms in University Hall had some splendid Elizabethan panelling, with lively carvings of moralising scenes. These were rightly thought too good to lose when the building was demolished, and so were re-erected in the Summer Common Room, where they can be enjoyed today.

Durham Buildings originally extended further to the south than it does now. It was shortened in the late 1950s to make space for the Goodhart Building.