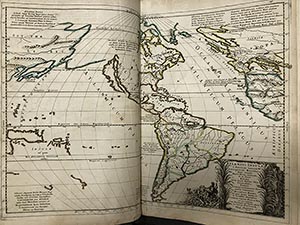 Our treasure this month is a map of America, printed in Paris in 1669. Researching this map has revealed a wealth of theories, some more credible than others, covering political intrigue, lazy cartographers, and debates over where myth and history overlap. It is a fascinating insight into human nature, and our desire to believe in the magical.

It was created by Nicholas Sanson (1600-1667) and his son Guillaume (1633-1703). Nicolas was a French cartographer and royal geographer. His sons succeeded him as geographers to the King. This particular map is curious for two reasons: one, it represents the Americas as the lost kingdom of Atlantis; and two, it represents California as an island.

The first reference to Atlantis comes from Plato, who describes an island as big as a continent, in an ocean beyond the Pillars of Hercules. It was named after Atlas, best known as the Titan condemned to spend eternity holding up the sky. The Atlantic Ocean also takes its name from him. When explorers unexpectedly found themselves on a large land mass in the middle of the Atlantic, it raised speculation that this might be Plato’s lost island. This is why this map is titled “Atlantis Insula”, the island of Atlantis. It shows the Americas divided up into the ten kingdoms which in mythology made up the lost island of Atlantis. Plato wrote that these ten rulers were the sons of Poseidon: Atlas, Gadeirus, Ampheres, Evaemon, Mneseus, Autochthon, Elasippus, Mestor, Azaes and Diaprepes. If you look carefully at the map, you can find each of these names, labelling the land Sanson was suggesting they might have ruled. It is unclear on what criteria he decided to divide the land up, except in that Atlas seems to have been given the vast majority of North America. 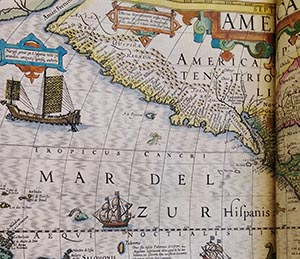 The other key attribute of this map is that it shows the Baja California peninsula as an island. This assumption seems to have come from an early association between California and a fictional tale of an island paradise populated entirely by women. The representation of California as an island is a feature of several maps from this period, which is interesting as the map dates from 130 years after the explorer Cortés confirmed that California was attached to the mainland. In fact, our own copy of Mercator’s Atlas (probably predating Sanson’s map) shows California attached to the mainland. Nonetheless, maps showing it as an island continued to be printed. 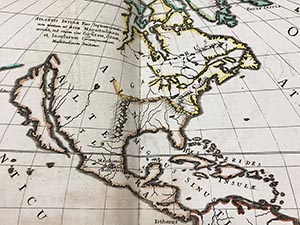 In our modern era, with satellite navigation and Google maps, all of this can seem very silly. Of course California is not an island, and once that was known why persist in representing it as one? Dora Beale Polk, in her book The Island of California, opens by explaining that when considering these maps and beliefs we must be careful not to just dismiss them as foolish and outdated, and forget the culture which inspired them. The mythology they inherited – of rich distant lands, Plato’s Atlantis, the island which held the garden of Eden, the various tales of all-female, Amazonian islands – had prepared explorers for the potential of finding all manner of exciting islands. Nor should we judge them for believing in these myths, Polk explains, as the exploration of the sea in search of monsters and magical lands was testing a hypothesis in the same way as we might speculate about alien life as we set off to explore the stars.

So, is it any wonder that, on finding a large landmass in the middle of the Atlantic ocean, explorers raised the suggestion that it might be Atlantis? Or that, once this suggestion had been made, it took root in the imaginations of the cartographers of the time?

It is unknown precisely why the belief that California was an island persisted so long after it was proven to be untrue. Potential factors include that the status of the land affected whether the colonial claims of the English or Spanish took precedent, that the cartographers were working off earlier maps and outdated information, or simply that the myth of California as an island was so compelling that it was felt to be more convincing than reality. 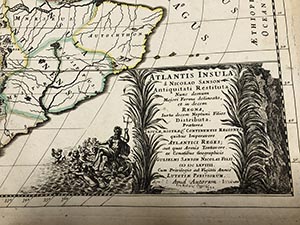 Eventually, however, the myth had to be let go. Gradually more explorers were reporting that it was a falsehood and, in 1747, Ferdinand VI released a royal decree proclaiming “California is not an island.” It wasn’t until 1776 that the dispute was settled once and for all, by Juan Bautista de Anza, who made the journey by land and thus proved that California was connected to the mainland.

Univ’s copy of this map is found bound in a volume of maps dating from the same period, and was part of the collection left to the college by John Browne. For more information about his library, read our treasure “Univ’s Heir Looms”.

If you would like to read more about Mercator’s atlas, you can find our Treasure on that here.

Polk, D. (1995). The island of California: a history of the myth. Lincoln: University of Nebraska Press.