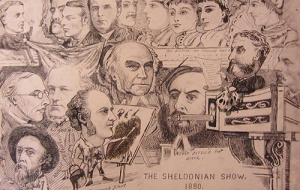 One of the diversions for the undergraduate of the later 19th century when going out for a walk would have been to stop by 23-24 Broad Street, which housed the book and print shop of Thomas Shrimpton & Son (and is now the site of “Cool Britannia”). As well as offering the usual fare of such shops, between 1868 and 1901 Shrimpton’s also sold caricatures of Oxford personalities and events. The caricatures were almost entirely the work of undergraduates.

There is much that we still need to know about these pieces: nothing is known, for example, about the process by which these caricatures were created (were they commissioned, or were Shrimpton’s content to receive unsolicited submissions?), nor do we know what payment, if any, the undergraduate artists received. Nevertheless the Shrimpton caricatures shed fascinating light on the concerns and interests of late Victorian undergraduates, be it which issues greatly concerned or merely amused them, or which personalities they wished to mock. We can imagine undergraduates regularly looking in the shop windows of Shrimpton’s, to see the latest caricatures on display, and trying to guess all the in-jokes.

The caricatures also include some important details not known elsewhere. For example, the only known images of Christian Cole, Univ’s pioneering Black African member, derive from Shrimpton caricatures (and present us with the problem that one has to separate out the generally realistic images of Cole from the offensively racist humour surrounding them).

A sense of the range of Shrimpton caricatures comes from the subject of this month’s Treasure, namely a small collection of them which were given to Univ’s archives by an unknown donor in 2013. Almost all of them are linked to Albert Chavasse, who was Fellow here from 1864-1902. Chavasse was Senior Proctor from 1880/1, and, as a prominent figure of authority within the University, he would inevitably have become the subject of the caricaturist’s pen. 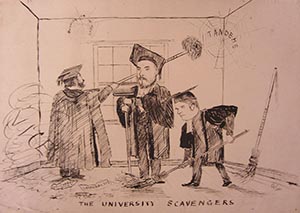 In this first image (right, ref. UC:P300/P1/3), we see Chavasse at the start of his Proctorship. The caricature is labelled “The University Scavengers”, and, rather unusually, is signed “EGC 1880″ (Ernest George Coney, matr. Keble 1878). Standing in the middle of the picture, Chavasse appears with his colleagues Robert Ewing and Frederick Warren (both Fellows of St. John’s), using brooms inscribed “Rustication” or “Fines” to clean up a dirty room full of cobwebs or items of rubbish with such labels as “Billiards after 9″, “Immorality” and “Tandems”. A nasty little beetle inscribed “Vice” scuttles along the bottom of the picture. 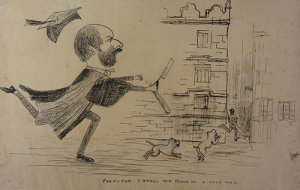 Chavasse belonged to an age when proctors were expected to patrol the streets in the evenings looking out for undergraduates who should have been locked up in their Colleges (older alumni of Oxford may remember when out at night being tapped on the shoulder with the question “Your name and College, Sir?”). So this caricature (left, ref. UC:P300/P1/3) imagines Chavasse, cut throat razor in hand and two bulldogs at his side, in hot pursuit of an undergraduate running into Univ with the caption “Fee Fo Fum: I smell the blood of a Uxxv Man”.

Merely being Proctor made Chavasse an inevitable target for Shrimpton’s caricaturists. However, it was members of Chavasse’s own College who gave undergraduate artists the sensation of 1880 (a fuller account of the following events can be found in Robin Darwall-Smith, A History of University College, Oxford (Oxford, 2008), pp. 402–5).  On 11 May that year Chavasse was attending a dinner out of College, and in his absence, for a jape, some Univ undergraduates screwed up the door into his rooms, leaving him having to enter them by means of a ladder. These two caricatures (below, both UC:P300/P1/2; probably by the same artist) mock the Senior Proctor’s undignified predicament. 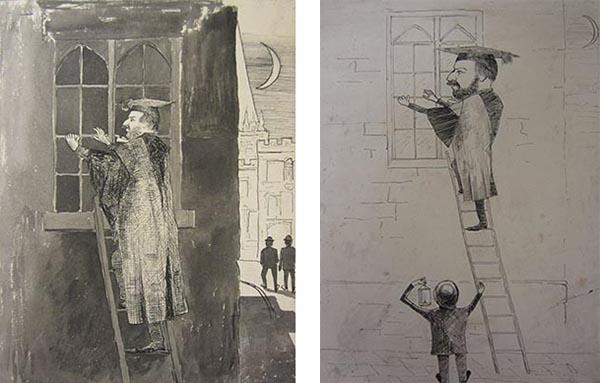 The then Master of Univ, George Bradley, was furious at the insult to so senior a University officer, and he summoned the undergraduates to a meeting, demanding that the perpetrator own up. Unfortunately, the perpetrator, Samuel Sandbach, had left early that morning for a yeomanry camp in Wales, and because the other students refused to sneak on him, the Master sent almost all of them down on the spot, to the astonishment (and hilarity) of the rest of Oxford. 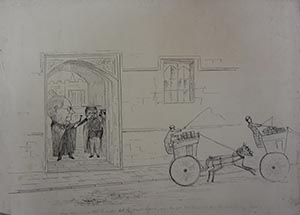 The Shrimpton caricaturists could not resist such an opportunity, and more than a few examples of their work reflect on it. In this example (right, UC:P300/P1/1), Master Bradley, with the Dean James Franck Bright in the background (with his magnificent beard), waves off two undergraduates, in a coach. A caption was later added in pencil: “We are determined to treat the matter with the utmost clemency and there-fore have decided to send the whole College down.”

This ridiculous state of affairs could not persist; Sandbach’s friends somehow got an urgent message to him in the middle of Wales, and, as was thought proper, he did the gentlemanly thing and promptly owned up. Thus the undergraduates of Univ were allowed to reconvene after a week’s unexpected holiday – and Shrimpton’s artists were again on hand to commemorate the occasion. 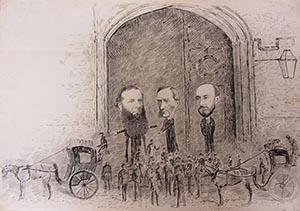 In this caricature (left, UC:P300/P1/1), then, from left to right, James Frank Bright, George Bradley and Albert Chavasse stand in front of the main entrance to Univ, with a clutch of undergraduates returning to the College after their expulsion. A copy of this image in the John Johnson collection has the caption “The welcome back again”.

It is interesting to contrast this caricature with the preceding one, because it shows well the differing styles of Shrimpton’s artists. The three dons in the welcoming party are drawn very carefully, to create accurate likenesses, whereas the images of Bradley and Bright in the expulsion scene are rather more cartoon-like. 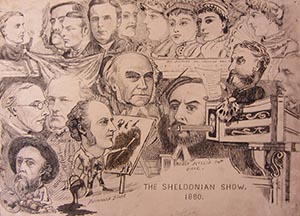 After the embarrassments of May 1880, it is only fair to end this selection of Shrimpton images with one showing Chavasse on a happier occasion, namely the Encaenia – or, as this cartoonist, identified only as “R.P.P.” called it, “The Sheldonian Show 1880” (UC:P300/P1/4).

This is the most complex of the caricatures in this group. In the top-left hand corner, up amongst the undergraduates and the women in the audience, is Bernhard Ringrose Wise of Queen’s College, captioned “Queen’s own Prodigy” (Wise, an Australian who later entered politics, had got a brilliant First in Law that summer). There may be other recognisable Oxford personalities up there, but they have so far not been identified.

In the front, from left to right, are three of that year’s recipients of honorary degrees, namely the economist (and supporter of women’s suffrage) Henry Fawcett, the former Home Secretary, Henry Austin Bruce, Lord Aberdare (captioned “Lordship”), and the artist John Millais (captioned “Brunswick Black”, presumably an allusion to his painting “The Black Brunswicker”). Next to them are Evan Evans, Master of Pembroke and then Vice-Chancellor, Albert Chavasse (captioned – inevitably – “Never screw’d but once”, Thomas Francis Dallin (then Public Orator), and an unidentified figure. In front of Fawcett is a figure resembling Sir Frederick Leighton, captioned “An Absent Artist”. Presumably the fact that Millais, and not Leighton, received a degree was a matter of comment at the time.

There remains much to investigate and explore among the caricatures produced for Shrimpton & Son, and we are very fortunate both that two almost complete sets of their work are held in the Bodleian Library, and that they have recently been fully catalogued by Colin Harris. His catalogue, and more information about Shrimpton & Son, can be found here.

We are very grateful to Colin for his helpful advice about the Shrimptons held at Univ.

One of our early printed books…