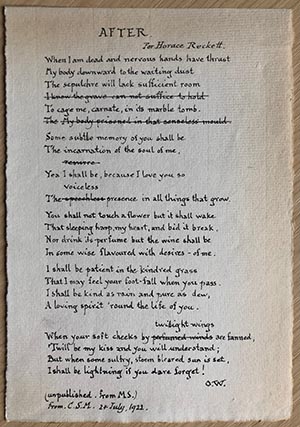 A recent discovery in the Robert Ross Memorial Collection has coincided, by happy chance, with the publication of an excellent book about the phenomenon of Oscar Wilde forgeries in the 1920s. Gregory Mackie’s book, Beautiful untrue things, examines the period during the early 20th century when Wilde’s reputation had been rehabilitated to such an extent that some enterprising rogues began to see the benefit in producing forgeries of his works.

Slipped into Walter Ledger’s copy of The poems of Oscar Wilde (Methuen, 1908) is a hand-written transcript of a poem titled “After: for Horace Reckett”. At the foot of the page Ledger notes that the poem, from an unpublished manuscript by Wilde, was sent to him by Christopher Millard on 24 July 1922.

Although it is now accepted that Oscar Wilde did not write this poem, both Walter Ledger and his friend Millard were at one point fooled by the forgery. In fact, Ledger appears to have gone to his grave believing the poem to be genuine, even though Millard shamefacedly wrote admitting that he had been deceived. In the transcription below, dated 26 July, Millard admits his error: 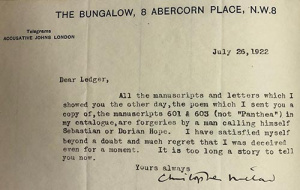 All the manuscripts and letters which I showed you the other day, the poem which I sent you a copy of, the manuscripts 601 & 603 (not “Panthea”) in my catalogue, are forgeries by a man calling himself Sebastian or Dorian Hope. I have satisfied myself beyond a doubt and much regret that I was deceived even for a moment. It is too long a story to tell you now.

Forgive me, please, for not writing sooner. The poem you sent me is charming, I think. Do you know who Horace Reckett is? A college friend? It sounds like it!

I am truly sorry at your disappointment concerning the M[anuscript]S. They looked genuine — I thought the writing rather large for O[scar]. W[ilde].’s later period & not ‘Greek-like’ enough — but they are wonderful forgeries. 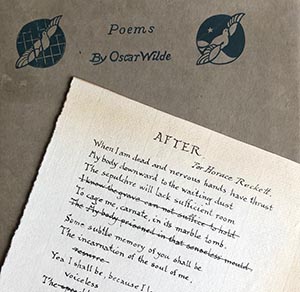 So, although Ledger acknowledges Millard’s error regarding some of the manuscripts, he fails to include this particular poem within the forged material. This might explain why he did not remove the transcription from his copy of The poems. Curiously, a proof copy of The poems, probably Millard’s own, has ended up in the William Andrews Clark Memorial Library in Los Angeles. Like that belonging to Ledger, it contains a copy (in typescript) of the forged poem. In this case, however, someone has written in blue pencil across the poem: “Mrs Chan Toon forgery”.

Mackie’s book goes into fascinating detail about the misdeeds of both Mrs Chan Toon and the person (or, more correctly, people) using the name Dorian Hope. The discrepancy between the identity of the forger identified by Millard in his letter to Ledger and in the proof copy in Los Angeles has not so far been explained. In one sense, the person calling himself Dorian Hope is the more likely culprit for the reason outlined below.

Dorian Hope, as Mackie demonstrates, is a slippery character. After some sleuthing in the 1920s, Millard identified the Wilde forger as Fabian Lloyd (aka Arthur Cravan), the son of Oscar Wilde’s brother-in-law. Fabian Lloyd’s colourful life story makes him an attractive suspect for the 1920s forgeries, but Mackie argues against him. Although Lloyd was involved in spurious accounts of his famous uncle’s life and works (even claiming that Wilde had not, in fact, died in 1900!) he disappeared off the coast of Mexico in 1918, never to be seen again.

Mackie posits that a better fit is a man called Brett Holland. The pseudonym “Dorian Hope” first appeared in a collection of poetry published in New York in 1920. The volume, titled Pearls and pomegranates, was soon revealed not only to be the work of Brett Holland rather than Dorian Hope, but also to contain plagiaries of the work of other poets, both living and dead. Brett Holland, with his history of plagiarising other poets, left American just before the story of Pearls and pomegranates broke in the media.

Since Mackie’s book was published, further investigation into the poem “After: for Horace Reckett” has expanded our understanding of the forger’s misdeeds. In addition to claiming that the poem, “After”, was written by Oscar Wilde, Holland compounds his crime by plagiarizing the work of another, little known, poet, John Gneisenau Neihardt (1881-1973).

Neihardt was an American poet, novelist, and ethnographer, born in Sharpsburg, Illinois. By 1922 he had published nine books, including a number of selections of his poetry, but none of these had been published in the UK. As Neihardt was essentially an unknown entity in the UK, Brett Holland was fairly safe in thinking that no one would discover his plagiary.

Holland, to confuse matters further, not only misappropriated Neihardt’s poem “When I am dead” but also altered and added to it. As an example, here are four lines from Dorian Hope’s version of the poem:

You shall not touch a flower but it shall wake
The sleeping harp, my heart, and bid it break,
Nor drink its perfume but the wine shall be
In some wise flavoured with desires – of me.

Whereas the original Neihardt poem has just the two lines, which read:

You shall not touch a flower but it shall be
Like a caress upon the cheek of me.

These additional lines swiftly and conveniently give the poem a queer narrative, making it worthy of the dedication to Wilde’s supposed “college friend” Horace Reckett. No-one called Reckett can be linked to Oscar Wilde, but the name may have been chosen because of its similarity to that of an illustrator of Wilde’s works, Charles Ricketts.

In one sense, it seems a shame that Walter Ledger, who spent more than three decades collecting and restoring the canon of Oscar Wilde’s works, did not appear to have recognized the true origins of this poem. In another, however, the existence of the poem shows that the work that Ledger and others were doing to rehabilitate Wilde’s reputation as an important literary figure was bearing fruit.