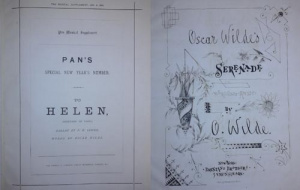 Our first Treasure for 2019 comes from the Robert Ross Memorial Collection and features two musical settings of Oscar Wilde’s poem “Serenade (For Music)”.

In December 1880, the editor of PAN magazine asked Wilde to write a poem on the subject of a young lady who discovers that love does, indeed, exist. Wilde appears to have strayed from this brief for what he wrote was called “Serenade (For Music)”, an imagining of a song sung by Paris as he awaited the arrival of his betrothed, Helen of Troy. The poem was published in Poems 1 (London, 1881).

The first setting of these words was by the composer FH Cowen (1852-1935). Cowen was known primarily as a conductor, and achieved fame when he took over direction of the Promenade Concerts from Arthur Sullivan in 1880. His compositional output, however, was not slim and included 10 operas, 18 cantatas, and six symphonies. His setting of “Serenade” was one of over 300 songs.

Cowen apparently did not know that the words had been written by Wilde, and in any case only set the first and last stanzas of the poem to music. Curiously, according to Wilde’s bibliographer Stuart Mason, the request from the editor for a text came after Cowen had written the music. The setting appeared in the PAN Musical Supplement for 8 January, 1881 under the title “To Helen, (Serenade of Paris)”.

The second setting of “Serenade” dates from 1883 and came after Wilde’s 1881 tour of America. Both during and after the tour there was such demand for Wilde memorabilia that many people produced unauthorised merchandise. One of these was this piece of sheet music produced by Brentano’s, a New York publishing house, entitled “Oscar Wilde’s Serenade”. The publication was later listed in a copyright infringement case concerning unauthorised Wilde products.

Controversy aside, there is more that makes this second setting quite interesting. First, it claims to be words and music by Oscar Wilde. We don’t know of many, if any, other musical compositions by Wilde himself so here we have a unique chance to hear both his literary and musical voice. Second, the copy we have in the Ross Collection appears to have been Wilde’s personal copy and was found by Robert Ross when sorting through Wilde’s papers.

The musical treatment of the words in each setting is quite different. We are able to let the music speak for itself as a recording of the two settings made by Emelye Moulton (BA, Music) and the Library Assistant, Phil Burnett, is available for listening below.