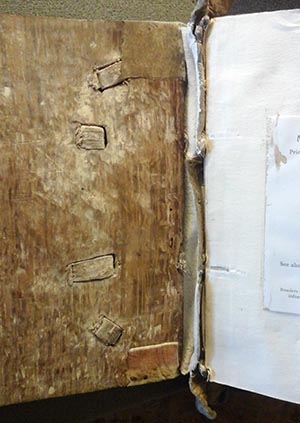 The College Library’s collection includes over 200 manuscripts, most of them medieval and many of them illuminated. The majority were donated in the 17th century, but there are some surviving from earlier bequests. In 1882 all our manuscripts were deposited in the Bodleian Library on long-term loan.

This month we feature what is thought to be our oldest manuscript, MS 104. It dates from the 11th century, and has been associated with Battle Abbey (Gameson, 1999). Battle Abbey was built on the site where the Battle of Hastings took place in 1066. Construction of the Abbey began under William the Conqueror, and completed in stages over the course of the next century. Whether MS 104 was made there or not is uncertain. Manuscripts were brought over from Normandy after the Conquest, but like every abbey, Battle had a scriptorium where the monks produced manuscripts. 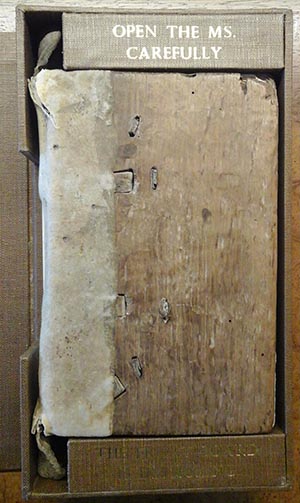 This much of the provenance we know, but we don’t know how MS 104 came to be in the College’s collection. It measures 19 x 12 cm and contains 100 leaves of parchment. Parchment is made from animal skin and was used for writing or, from the mid-15th century, printing on. Of particular interest is the original 11th century binding (see fig. 1). The text block (made up of little booklets called quires that were sewn together) was attached to the boards by cords which were threaded onto the wooden boards and attached with dowels or pegs.

It would be fascinating to date the wood and find out how old the tree was when it was felled to make the boards. It is possible that the boards are several centuries older than the manuscript itself.

Another feature of the binding is the tabs at the top and the bottom of the spine (see fig. 2). These were used to lift the book out of the chest in which it was once kept. 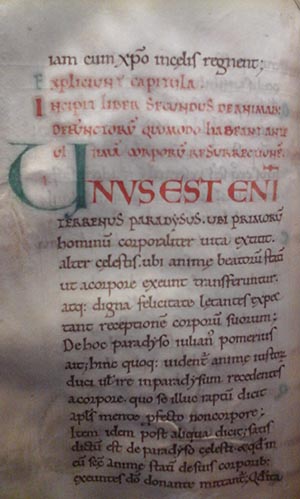 The manuscript contains a copy of Julian of Toledo’s Prognosticon futuri saeculi. Julian was bishop of Toledo from 680 to 690. The Prognosticon established Julian’s fame as a medieval thinker and theologian because in it he established the Christian theology on Purgatory, or delayed retribution. It is an eschatological work and contains a discussion of what happens to the soul between death and Judgement Day. In the second book of his treatise (see fig. 3) Julian explains that there are two paradises: one is earthly (“Unus est terrenus”), and the other celestial (“alter coelestis”) where the good souls wait until Judgement Day.

The book contains other interesting features. There are the marginalia, such as the adder-looking serpent (see fig. 4). A number of the leaves have holes in them (see fig. 5). These holes probably formed during the parchment-making process. There are also decorated arabesque initials (see fig. 6).

There is a wider story to MS 104. Even before the Norman Invasion, the monks who lived and worked in English monasteries came from France, the Low Countries and other parts of the European mainland, and this continued after 1066. Indeed, Battle Abbey was staffed by monks from Marmoutier Abbey. Those who worked as scribes used the styles they knew in making manuscripts. So although a manuscript may have been made in Britain, it would have been the result of transnational contribution and collaboration. MS 104 is, therefore, a witness to the centuries-old story of the movement of people, commodities, and artefacts which has characterised the close (and, at times, fraught and complicated) relationship between Britain and mainland Europe. 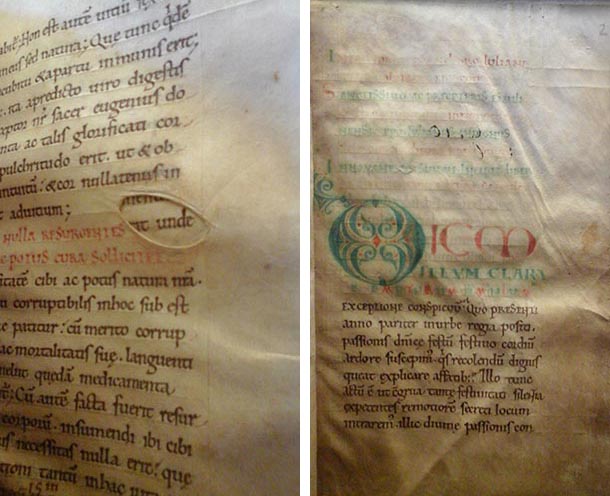