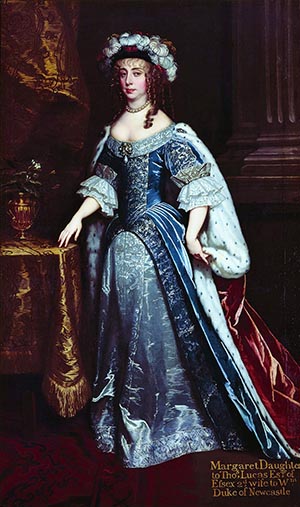 In the fortieth anniversary year of the first women students arriving at Univ, it seems appropriate to write a Treasure on some of the Library’s oldest books by a female author. Margaret Cavendish Duchess of Newcastle (1623-73) was a unique character for her time. A playwright, poet and early proponent of science fiction, as well as a clothing designer and scholar of science, she had a versatile and adventurous mind.

She started life quietly as Margaret Lucas, in a well-off household in the Essex countryside. When she was nineteen, however, she and her family were forced to flee to Oxford to seek protection from the English Civil War. The family were staunch Royalists so they were welcomed by the Court, who were stationed in Oxford at the time.

Margaret gained employment as a maid-of-honour to Queen Henrietta Maria. In 1644 she travelled with the Queen to Paris, where she met and fell in love with the exiled William Cavendish, Duke of Newcastle. Despite the Queen’s misgivings about the thirty-year age gap between Margaret and the Duke, they married happily. They lived in Paris and Antwerp before returning to the Duke’s English estates upon the Restoration of the Monarchy.

The duties of marriage would have put an end to intellectual pursuits for many seventeenth-century women, but Margaret was more fortunate. A keen poet himself, the Duke enthusiastically proofread her literary efforts and funded their publication and performance. His brother, the mathematician Sir Charles Cavendish, recognised Margaret’s scientific potential and taught her about the theories and experiments that were revolutionising the world around her. Margaret did not add to the Duke’s family of ten children from a previous marriage so, with healthy finances and no dependents to care for, she was able to devote as much time and energy as she wished to her studies. 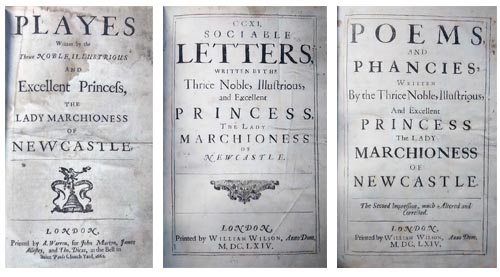 In a bold move for a time when women were barred from universities, Margaret donated specially bound copies of her written works to all the libraries of the Universities of Oxford and Cambridge. They are large, folio-sized books with meticulous post-printing corrections, showing great pride in the art of publishing. A few College officials (notably Thomas Barlow of Queen’s College, Oxford, and Jasper Mayne of Christ Church) sent letters of thanks, but most of the books were stored away without acknowledgement. Many shifts in the perception of women were required before Margaret’s works could be acclaimed for their distinctive voice and imagination, rather than dismissed as the vanity projects of a wealthy eccentric.

All three of our remaining early Cavendish books contain the above record of their provenance, written by Thomas Walker (Master of Univ, 1632-48 and 1660-65)

Margaret was not always helped by the way she presented herself in public. Reports exist of her attending the theatre with exposed breasts and decorated nipples, and parading through London with an entourage of velvet-clad footmen. Samuel Pepys wrote in his diary entry of 30th May, 1667, that ‘her dress [is] so antic and her deportment so unordinary, that I do not like her at all’. John Evelyn’s diary referred on 18 April 1667 to her ‘extraordinary fancifull habit, garb, & discourse’. Even a reader of Univ’s copy of Poems, and Phancies could not resist a jibe about Margaret’s flamboyance: they annotated her line ‘Thus Write I much, to hinder all Disgrace’ with ‘Thus write she more, to accumulate disgrace.’ Either they repented of their malice or a later reader came to Margaret’s defence, because the annotation has since been crossed out.

The crossed-out jibe about Margaret’s eccentricity in our 1664 copy of Poems, and Phancies

Interestingly, it seems as if Margaret’s extravagant behaviour did not represent her true self. No. CXXXVII of her Sociable Letters (opinion pieces presented as correspondence with a fictional female friend) gives a detailed and honest account of the physical and mental effects of social anxiety. It is hard to imagine that someone genuinely confident could have known about the blushing, palpitations and mental numbness that many shy people experience, which suggests that the bizarre clothing and self-promotion were a mask.

Univ Library’s Benefactors’ Book states that we were lucky enough to receive six of the books that Margaret donated to the Oxford Colleges. Three remain in our Library: Playes (1662), CCXI. Sociable Letters (1664), and Poems, and Phancies (1664). Of the other three, two unfortunately are missing without trace; we have no record even of their titles, which suggests that they did not last long in our collection. Regarding the final book, there is an intriguing story.

In Summer 2018, Professor Liza Blake from the University of Toronto came to consult our Cavendish donations as part of her research. We showed her the three books we have, and our work-experience student found the title of another in our handwritten catalogue of c.1805: Philosophical Letters (1664). The catalogue entry had been crossed out, so we could deduce that the book had been sold or gone missing sometime during the nineteenth or early twentieth centuries, before the next catalogue was created. We did not expect to learn anything more, given the sparseness of the records.

The record in our handwritten catalogue of c.1805, with Philosophical Letters crossed out

We were very surprised when Professor Blake contacted us again in December 2018 to say that she had located the book in the library of the University of Leeds. One of its Univ bookplates had been pasted over, which could suggest a mild attempt to cancel its affiliation with us, but the other Univ bookplate was still fully visible. We have not yet discovered any evidence of how the book travelled from Oxford to Leeds, but we are glad to know that it is safe and still in use.

As well as Professor Blake, other researchers have recently taken an interest in the works Cavendish donated to the Universities of Oxford and Cambridge. In this important year for women at Univ, it is nice to think that Cavendish is now receiving the scholarly attention she coveted throughout her life.

Cavendish, M. (1662), Playes written by the thrice noble, illustrious and excellent princess, the lady Marchioness of Newcastle. London: A. Warren.

Fizmaurice, J. (1991), ‘Margaret Cavendish on her own writing: evidence from revision and handmade correction’, in The papers of the Bibliographical Society of America, 85, pp. 297-308. Chicago: University of Chicago Press.

Women at Univ 2019. Celebrating 40 years of achievement by women students and academics, and recovering the history of women in the College from 1249 to the present day.