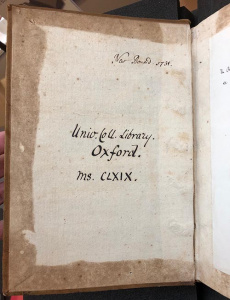 For this month’s Treasure, we feature one of Univ’s late medieval manuscripts. University College MS 169 is “The Ordinale and Customary of the Benedictine Nuns of Barking Abbey”, thought to have been made around 1404.

Barking Abbey was founded in the 7th century by Saint Erkenwald (sometime a bishop of London) for his sister Saint Ethelburga. The Abbey became a significant site for the English Church and was mentioned by the Venerable Bede in his work Historia Ecclesiastica. It survived the Norman Conquest (William the Conqueror stayed at Barking Abbey and granted it protection through a royal charter) and continued to flourish for another four centuries. Unfortunately, it did not escape Henry VIII’s Dissolution of the Monasteries when the Abbess and nuns were forced to surrender all property and possessions to the Crown. Nothing remains of the original abbey church, although a gatehouse, known as the “Curfew Gate”, still stands in the grounds of the present-day parish church of Barking, and can be seen from Barking Broadway. 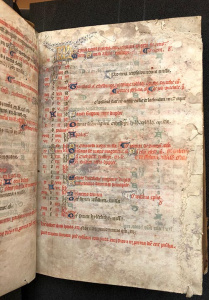 The manuscript was made when Sibille de Felton was Abbess of Barking, a post she held from 1393-1419, and the work carried out by an anonymous scribe, possibly at the Abbey. Each of its 224 leaves of vellum measure around 24 x 16cms. The manuscript, however, is not in its original state: some leaves have been lost, and a note on the front pastedown tells us that the volume received a new binding in 1731 (Figure 1 above). There is also some damage to the first few leaves (see Figure 3).

The manuscript contains mainly text in shorthand, although there are occasional extracts of musical notation (Figure 2). This book was really an aide-mémoire or point of reference, hence the brevity. The full texts and music would have been available in other books, or committed to memory. There are also not many elaborate decorations, except for where something important needed to be highlighted. 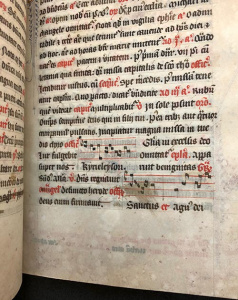 MS 169 contains three main sections. The first is the Calendar which lists all the major and important feasts, including some saints connected with Barking. On 24 March (Figure 3), for instance, the nuns remembered St Hildetha, a French nun who taught St. Ethelburga (incidentally, you can also see the Feast of St Cuthbert – Univ’s saint – on 20 March).

The Proper of Saints gave directions for the texts to be used at the services on particular days. The most striking page in this section contains the directions for the Feast of the Birth of the Blessed Virgin Mary (8 September) (Figure 4). The rich decorations on this page – the most elaborate in the whole manuscript – show that this day was a most significant day in the liturgical year. 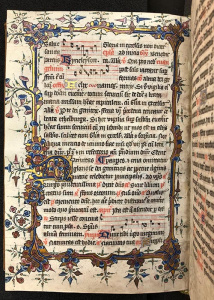 Finally, there is a section containing directions for occasional ceremonies, such as the election of a new Abbess. The marginalia and crossings out (see Figure 5) suggests that the liturgical practices recorded in this manuscript at Barking were often revised and rethought.

During the 17th century, the manuscript was in the possession of John Humphrey of Rothwell, whose collection included several other manuscripts from Barking Abbey. When Humphrey put it on sale in 1682 it was bought by Obadiah Walker (Master of Univ, 1676-89). Space precludes speculating as to why Walker acquired this manuscript, but here are two possibilities. The William Rogers bequest made in 1670 boosted the College’s collection of manuscripts, so perhaps Walker saw purchasing MS 169 as further growing this collection. Walker was also only four years away from his ‘conversion’ to Catholicism, and so perhaps interested in pre-Reformation liturgical practices. 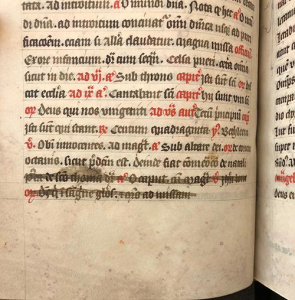 We are privileged to have this manuscript in our possession. Apart from the “Curfew Gate”, MS 169 is the only other physical remain of Barking Abbey. It is therefore significant for not only this reason, but also that it provides a window into the life of a female monastic community in Medieval Britain.