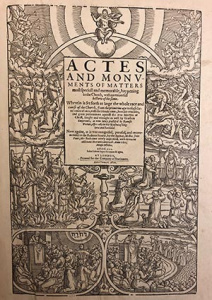 Since at least 1336 books have been donated to Univ. Our Library still receives gifts of books from Old Members or people associated with the College.

This month’s Treasure features a book given to the College in the 16th century. It came from Mary Bishop “in thanks for her son John’s time at Univ.” (see Figure 1). We don’t know much about the Bishop family, except that John came up in June 1585. The volume listed in the Benefactors’ Book was printed in 1610 so we can presume that Mary gave it soon after this time.

John Foxe’s Actes and Monuments, better known as “Foxe’s Book of Martyrs”, surveys the history of Christian martyrs, with a particular focus on Protestant England. Foxe’s polemical commentary is fiercely anti-Roman Catholic and, as it was widely read, came to have a significant influence on the shaping of English attitudes towards Roman Catholics. 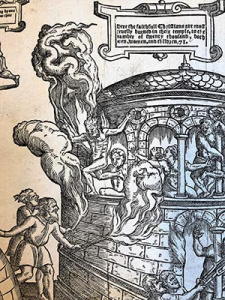 John Bishop was 15 when he came up in 1585 so he was born in 1570, only ten years after the public execution of Nicholas Ridley, Hugh Latimer, and Thomas Cranmer (the so-called “Oxford Martyrs”). An account of their martyrdom is found in Actes and Monuments, and it would not only have been an event that was still spoken about in the early seventeenth century, but also probably remembered by many like Mary Bishop.

Foxe’s narrative laid heavy emphasis on English Protestant martyrs (especially those persecuted during the reign of Mary I) and its subjects are largely male. It also records the stories of women who lost their lives because of their faith. Figure 2 shows a woodcut illustration depicting a burning temple filled with Christian women and men perishing in the flames.

The book contains many woodcut illustrations, including two depictions of English protestant monarchs. One shows Henry VIII, who can be seen in Figure 3 tramping on Pope Clement VII. Another is of Elizabeth I who can be seen in Figure 4. The initial “C” of “Christ” is richly decorated. As Elizabeth sits in the middle sits Elizabeth I a clear association is drawn between the Son of God and the divinely-appointed monarch. 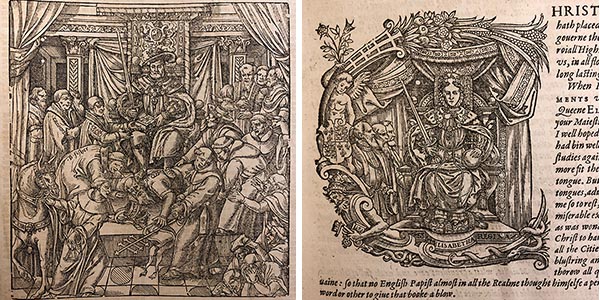