Our latest Treasure is a very new one indeed, only installed in early November 2018. It does, however, mark the end of a tale which began over a century ago.

It is a memorial for Rolf Wilhelm Baron von Seldeneck, Univ’s only German casualty in either World War. Rolf had been born in 1890, the youngest child of Wilhelm Rudolf Baron von Seldeneck. He had one brother, Hans-Wilhelm, and three sisters, Jenny, Else and Herta. The family lived in Karlsruhe.

As befitted a well-born young man, Rolf studied at three universities. He was at Munich in the summer semester of 1910, and he also studied at Geneva. He then came up to Univ in October 1911, and his entry in the Admissions Register is shown here.

Quite a few Germans studied at Oxford before 1914. Cecil Rhodes had arranged in his will that some of his new Rhodes Scholarships be allocated to German students, and so Oxford welcomed several Germans among its early Rhodes Scholars. Other Germans who were not Rhodes Scholars (like Rolf) were also inspired to come and study at Oxford too. We know of at least seven Germans who came up to Univ in the decade before 1914. 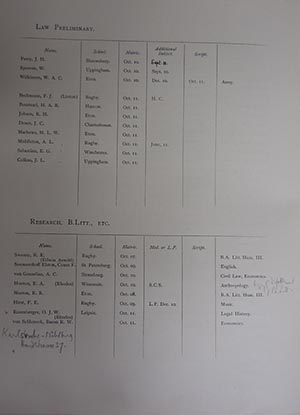 This extract from the Tutorial List for October 1911 shows that Rolf was studying Economics. He was just here for a year. One has the sense that Rolf was one of those students who saw his university years as a chance to acquire “polish” and connections, rather than a degree.

There certainly were connections to be made. One of his contemporaries, listed here as “Soumarokoff Elston, Count F.” is better known to posterity as Prince Felix Yusupov, the future assassin of Rasputin. Another student listed here, Alexander von Grunelius, also came from Germany. While at Oxford, von Grunelius helped create a club called the “Hanover Club”, which was intended as a forum for furthering Anglo-German friendship (a poignant time for such a thing to be founded). Most of its members, both British and German, were rather aristocratic. Minutes of its meetings survive, and show that Rolf attended meetings of the Club.

At the moment it is not known what Rolf did immediately on his return to Germany in 1912. However we do know that he joined the army during the First World War, and rose to become a Royal Prussian lieutenant in the 1st Baden Leibdragoner Regiment No. 20.

Rolf von Seldeneck was killed on 24 January 1917, while serving in Courland, which is now part of Latvia. His body was, however, transferred to Germany and buried on 23 February 1917 in the family plot at the Mühlberg cemetery in Karlsruhe.

Rolf never married, and his older brother Hans-Wilhelm von Seldeneck died in 1934, leaving no children, so that the male branch of the family died out. Family tradition has it that Rolf, as the baby of the family, was adored by his older sisters, who were deeply affected by his loss, having expected great things from him. It did not help matters his elder brother proved a ne’er-do-well, who squandered quite a bit of the family fortune. The family even commissioned a portrait of Rolf after he died as a way to remember him (something which several well-off British families also did).

After the end of the First World War, when Oxford Colleges, like so many other institutions all over Britain, were preparing to commemorate their war dead with grand memorials, Univ preferred not to remember Rolf, although, as his entry in the Admissions Register shows, we knew of his death. Other Colleges at the time behaved in the same way. The story of how this mood changed, and we came to erect his memorial is told in more detail in the “News” section.

But what did Rolf look like? We have been fortunate to be able to make contact with some members of Rolf’s family, one of whom, Peter Baron von Holzing, attended Evensong on Remembrance Day 2018 to represent the family. Another relative has kindly sent us photograph of Rolf, of which we reproduce one.

We end with something tantalising. Below is a group photo of the College taken in the summer of 1912, towards the end of Rolf’s time at Univ. We would like to think that Rolf is somewhere here, but so far neither the Archivist nor Rolf’s relations have been able to agree on a certain identification of him. We leave it to readers of this article to see if they can do better. 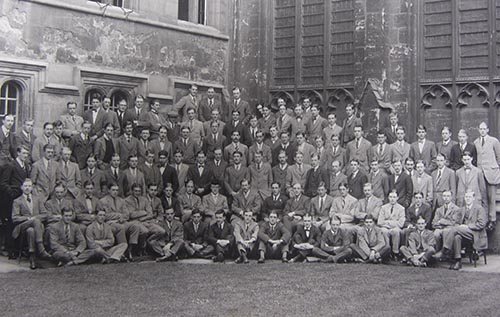