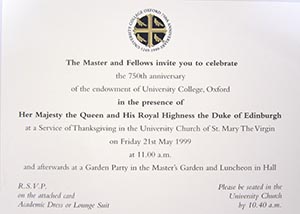 2019 marks twenty years since Univ celebrated the 750th anniversary of the benefaction of William of Durham – the first College in Oxford or Cambridge to pass that milestone.

Much happened during that memorable year, but perhaps the most significant event was the visit paid to the College on 21 May 1999 by Queen Elizabeth II, the Visitor of the College, and Prince Philip, Duke of Edinburgh, our senior Honorary Fellow. So for this month’s Treasure, we go back two decades with this invitation (pictured left) to join in a special occasion.

This was only the second time that a reigning monarch had visited Univ, the previous occasion being when James II came in 1687, and among other things saw the van Linge windows in the Chapel and the recently-installed statue of himself above the entrance to the College. At this stage the Chancellor of the University was our Visitor, and so no monarch had visited Univ since the Crown became our Visitor in 1729.

However, the Queen had been to Univ once before in 1948, when, as Princess Elizabeth, she watched a specially commissioned play, The Masque of Hope, performed by the Oxford University Dramatic Society (OUDS) in Radcliffe Quad. These two photographs taken by the late Norman Albone (1947) show the Princess taking her seat for the show, and St. George riding into the Quad at the climax of the Masque (ref. UC:P256/P1/1-2):

We today may ponder the logistics of trying to get a large horse into Radcliffe Quad!

At a very early stage of planning our 750th anniversary, the hope had been expressed that the Queen and the Duke might be able to visit us, and an invitation was duly submitted via the Lord Lieutenant of Oxfordshire. There was great relief when it was known that our invitation had been accepted, and that a visit would indeed go ahead.

It was a happy coincidence that, just a few days before the Queen’s visit, Andrew Motion (1971) was appointed Poet Laureate – the first member of Univ to hold this post. 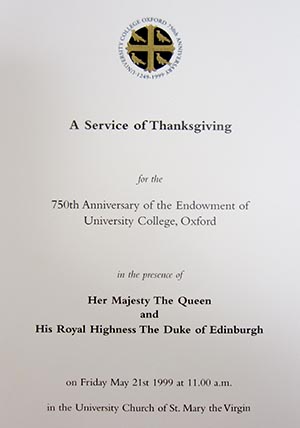 On this occasion, the Queen and the Duke began by attending a Service of Thanksgiving in the University Church of St. Mary the Virgin, attended by many University and City dignitaries. The music was provided by our Chapel Choir and Univ musicians. The sermon was preached by an Old Member, Richard Burridge (1973), then Dean of King’s College, London.

After the service there was a walkabout in Radcliffe Square, after which the royal party went to the Bodleian to see an exhibition on the history of the College curated by our Archivist, Robin Darwall-Smith.

The Queen and the Duke then were driven back to Univ, where they were greeted at the Lodge by our then Master, Robin Butler, and taken through the College to a garden party in the Master’s Garden. A marquee was erected there, and College staff, Old Members, and Fellows were all introduced to our visitors. 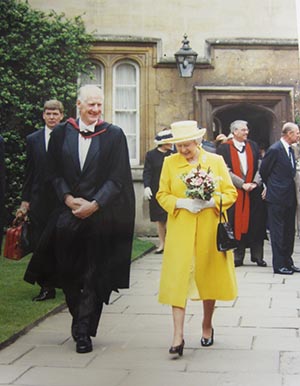 After the garden party, the Queen and the Duke went on to the JCR (the Staircase II entrance had been freshly painted for the event!) where they met groups of students, representing the major clubs and societies, before sitting down for lunch in Hall where we were joined by dignitaries from Oxford City, the University, and the County of Oxfordshire.

The Queen, in offering a toast to the College, gave a short speech, including these extracts:

“I remember clearly my last visit to Oxford University in the lean days immediately after the War. The University Dramatic Society indeed produced a Masque of Hope for the occasion. A leading character took the role of Black Market and offered me cans of petrol and nylon stockings. I have not yet today been offered such gifts, which I suppose brings home how the material things in life have change for the better over the last half century. 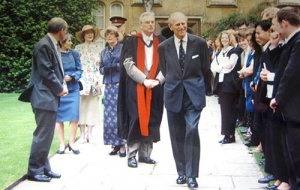 The Duke of Edinburgh in Radcliffe Quad with Dr Gordon Screaton, our then Vice-Master (photograph given by Jill, Lady Butler; ref. Acc. 157)

“There is great pleasure to observe how university life in Oxford thrives. The university and University College in particular proved an example of how roots and experience, worked and applied with an eye to the modern world, can continue to provide excellence.”

After lunch, the Royal party went on to other engagements within Oxford, while those of us left behind in the College had the chance to look back on what had been a most successful and happy event, and a real highlight of our recent history.

A fuller report of the visit, with the full texts of the speeches delivered both by Lord Butler and the Queen and some more photographs, may be found in the University College Record Vol. XII no. 3 (1999), pp. 19-27.