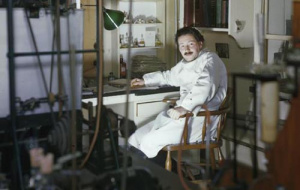 At a time when scientists working in Oxford have seized international attention thanks to the Covid vaccine which they have produced, it seems appropriate to remember another occasion when Oxford scientists made a great breakthrough in medical science, namely the development in the 1940s of penicillin as an anti-bacterial drug. This month’s Treasure focuses on one of the prime movers in this work, Sir Ernst Chain, and his little-known links with Univ.

Ernst Boris Chain was born in Berlin, and began his scientific education there. He was also an accomplished pianist, who in his youth considered a career in music, but eventually chose science. However, Chain was Jewish, and in 1933, when Hitler came to power, he left Germany for England. 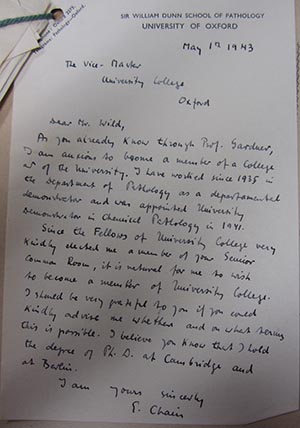 By the mid-1930s he was working in Oxford, where he was appointed a departmental demonstrator at the Department of Pathology in 1935, and a University Demonstrator in Chemical Pathology in 1941. Whilst at Oxford Chain collaborated with Howard Florey in their groundbreaking research into penicillin, and were able to prove its importance as an anti-bacterial drug.

It was at this time that, in May 1943 he wrote to John Wild, then our Vice-Master to ask about becoming a member of the University, and in particular to be a member of Univ.

The letter shows that Chain was already a member of Univ’s SCR, although there is no documentation to show when this happened.

The link between Chain and Univ was almost certainly through AD Gardner, known to all as “Duncs”. 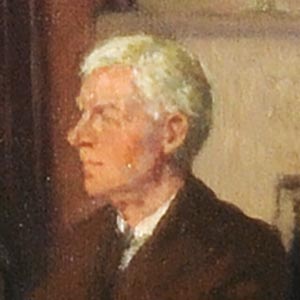 Close-up of “Duncs” Gardner from a portrait of the Master and Fellows of Univ from 1934 by FHS. Shepherd

Gardner had come up to Univ in 1903 and read Law, but then unexpectedly turned to the study of medicine, specialising in bacteriology. He returned to Oxford, where Univ elected him a Fellow in 1927, and in 1935 he was appointed Reader in Bacteriology. He later became Regius Professor of Medicine. “Duncs” was by all accounts a very likeable man, remembered for his good nature, and for his ability to make the Univ SCR a friendly place. Writing in the University College Record of 1978, Lord Redcliffe-Maud said of him that “he was the sort of person for whom it was impossible not to feel deep affection.”

As a bacteriologist, Gardner was part of the team including Chain and Florey who were working on penicillin, and so Chain would have come to know Univ through Gardner.

Chain was requesting to be incorporated as a member of the University of Oxford in general, and of Univ in particular. Incorporation is a system of very long standing, whereby a student who had been awarded a degree from one university could arrange to have the equivalent degree conferred on him by another. Chain had been awarded a Ph.D by Cambridge, and so it was straightforward enough to arrange that he now be incorporated as a D. Phil. at Oxford.

Chain was thus incorporated as a graduate member of Oxford on 12 June 1943, and was then able to sign our Admissions Register: 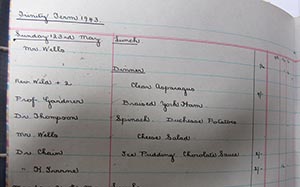 Chain certainly used of his new connection: SCR accounts show that he dined in College from time to time until March 1945, and so he would have been known to our wartime Fellows. For example, more than once in late 1944 and early 1945 Chain was dining with Harold Wilson. This photograph (right) shows what is probably the earliest occasion that Chain dined in College, on Sunday 23 May 1943.

Even at the height of wartime rationing, the College kitchen still tried to offer a three course dinner. 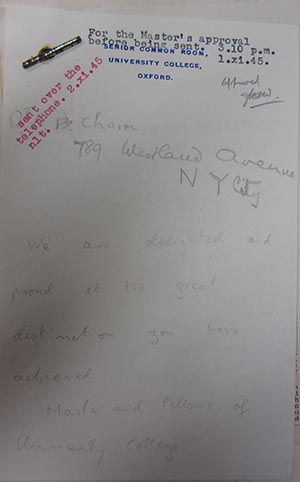 In November 1945, Chain’s great contribution to science was celebrated when, along with Howard Florey, and Alexander Fleming, the original discoverer of penicillin, Chain was awarded the Nobel Prize for Medicine. The College made sure to send him a congratulatory telegram (left).

Chain’s links with the College were loosening after the war. He can be found dining in the College in May 1946 (ref. UC:O1/F8/4), but that seems to be his last appearance. Sadly, he was unable to find a permanent post in Oxford, and for several years lived and worked in Italy. He returned to England in 1961 to become Professor of Biochemistry at Imperial College London, and was knighted in 1969. He died in 1979.

Because Ernst Chain was neither a Fellow nor a former student of Univ, it is easy to overlook his links with this College, but, at the very time that he was engaged in his great work, and when he received his Nobel Prize, he was indeed a member of Univ, and so we should celebrate his links with us – as well as those of his collaborator “Duncs” Gardner.

More on Chain’s life can be found in his entry in the Oxford Dictionary of National Biography. A. D. “Duncs” Gardner’s obituary is in University College Record, Vol. VII no. 4 (1978), pp. 163-5.

One of our early printed books…